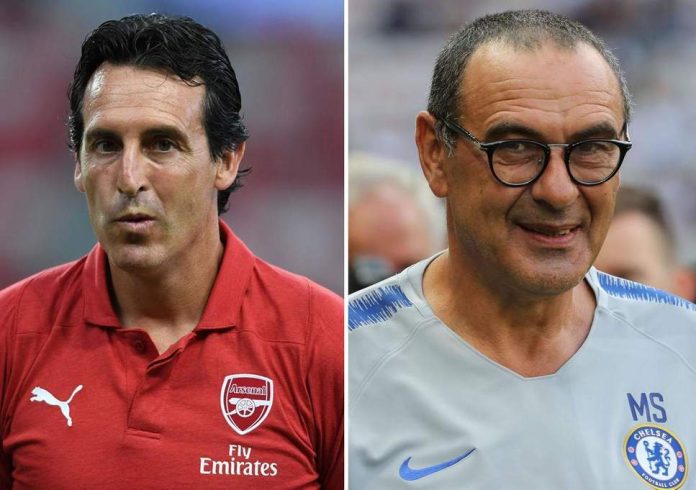 It is once again that time of the year when two heavyweights of English football are desperate to meet each other. It’s Arsenal vs Chelsea; North London vs West London; Reds vs Blues; on 19th January 2018 at the Emirates Stadium. A fixture that never fails to entertain the football fans across the globe, where icons and legends are made! Both the teams went under managerial changes before the start of this season. Arsenal showed their faith in Unai Emery as Arsene Wenger’s successor; on the other hand, Chelsea appointed Maurizio Sarri to replace his Italian counterpart Antonio Conte!

The Gunners had a rough and struggled a lot at the very early stage of the season. Sooner than later, Emery came up with the solutions and his side went on a 22 matches unbeaten steak. Maurizio Sarri, though, had a pretty smooth start and saw his team performing well against the other big names of the league.

In the recent weeks, the same, old problems of both the English heavy-weights have begun to appear once again. While the Reds are busy to fix the holes in their defense, the Blues are still struggling to put the ball in the opponent’s net!

The two sides last met at Stamford Bridge on 18th August,2018 in which Marcos Alonso scored the decisive goal as Chelsea won the first London derby of the season by 3-2.

Telecast Details And Live Streaming :
The match will start from 5.30 pm (GMT). The match will be telecasted in Star Sports Network and one can also watch it on Hostar.

Arsenal F.C. :
Henrikh Mkhitaryan, Danny Welbeck and Rob Holding – all three of them are out injured and will be unavailable to face their local rival. Arsenal don’t have any player suspended for this match.

Chelsea F.C. :
Ruben Loftus-Cheek is out for nearly a month with a back injury. Besides that, none of their players has any major injury at this moment. They also don’t have any player suspended to face the Gunners.

Players To Watch Out For :

Eden Hazard :
The Belgian wizard, as always, is his team’s “TALISMAN” this season. With 10 goals and 10 assists in 22 games, he is the only player after Lionel Messi, to hit double-digits for goals and assists in Europe’s top five leagues. In the last meeting between these two teams, he came off late to provide the winning assist to Marcos Alonso. He could again be the man to make the difference at the Emirates!

Pierre-Emerick Aubameyang :
The African goal-machine is one the most and probably the most infulential Arsenal player on the filed! Presence of mind, game reading ability, pace, pinpoint finishing – all of these characteristics that he has are enough to prove why he is a manager’s ‘dream forward’. It’s his hunger for goals which has made him the joint top scorer of the league. His presence on the field could turn out to be a headache for Maurizio Sarri.