HomeAsiaHow The Indian Team Managed To Pull Off A Spectacular 4-1 Win...
AsiaInternational NewsWorld 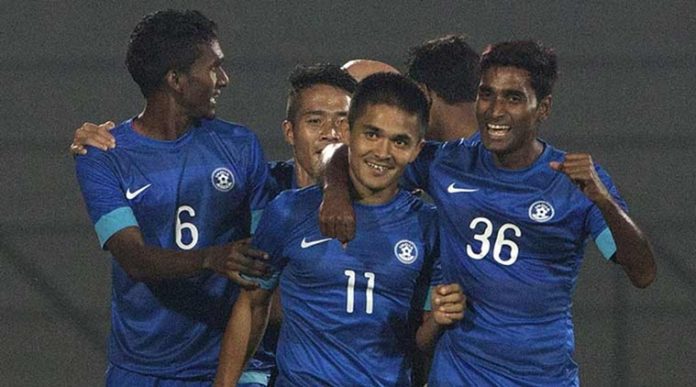 The Indian football team secured a highly memorable win in a friendly match against Puerto Rico, which stunned the footballing world. Mumbai, the city that never sleeps, was given yet reason to have a crazy party as India beat Puerto Rico 4-1 on Saturday night in a highly pace game. Indian football fans were given a treat as their national side entertained the packed house, with some really entertaining football. The final score was 4-1, though if the Indians had finished off the chances that they got, could and probably should have been scored many more.

It was surely one of the biggest wins for the Indians in recent history, with manager Stephen Constantine and his players making their motherland proud with their effort. The Blue Tigers beat their opponent on the night, which is ranked more than 30 places above them in the standings and also dominated them for nearly 80 minutes.

After going down early in the 8th minute, the Indians came roaring back as goals from Narayan Das, Sunil Chhetri and Jeje Lalpekhlua made it 3-1 going into the half. They pressed further forward in the second half and were rewarded with another goal from Jackichand Singh.

Whilst Chhetri stole the show with his brilliant performance, the team’s execution, as well as Constantine’s plans have to be given due respect. The Indians were deployed in a 4-4-2 on paper, but Constantine realised soon after the start of the game that they were getting outplayed in central midfield. And the game changed when Constantine went 4-4-1-1 with Chhetri dropping deep.

While Chhetri helped control the pace of the game, Jeje Lalpekhlua was his opportune self and ran the channels with ferocity. Eugeneson Lyngdoh, meanwhile, was mesmerising with his touch on the ball and the precision of his passing. It was soon enough that Jackichand Singh joined the party and could have had the moment of the game when he tried an audacious chip from nearly 40 yards out.

The defence also looked sound for most parts of the game barring the start as Arnab Mondal and Sandesh Jhingan bossed Emanuel Sanchez. Whilst Narayan Das sparkled only for a little while, it was an important touch. A miss from the rebound would have let the shoulders drop and the after-effects could have been pretty different.

Gurpreet Singh Sandhu also came good when called upon and it was a welcome change to see him commanding in the air as well. Here are the highlights of the game. Must watch, as Chhetri was magical on the night!