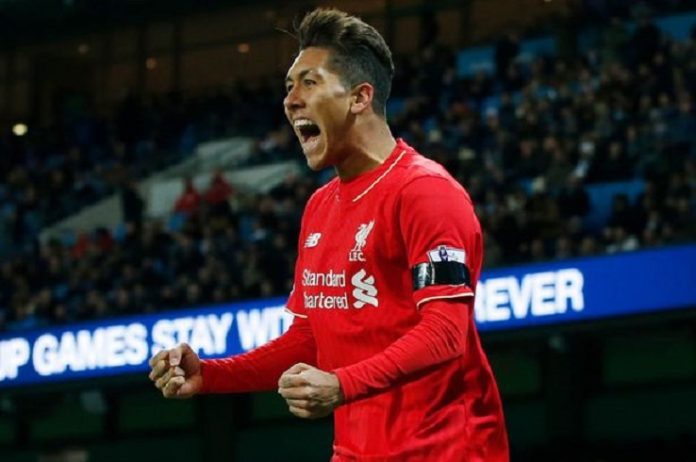 Firmino scores a brace as Reds beat current premier league champions at the new Anfield.
Jurgen Klopp’s men perform amazingly in front of the new Main Stand as Sadio Mane and Adam Lallana also find the net. The Reds home campaign kicked off to a impressive start as they christened the new-look Anfield with a stunning 4-1 win over current league title holders Leicester City.

A double from Brazillian international  Roberto Firmino  and strikes from Sadio Mane and Adam Lallana gave Jurgen Klopp’s team a much deserving three points on a memorable evening in front of the stadium’s new Main Stand.

Not even Jamie Vardy’s strike, which had put the scoreline at a precarious 2-1, could stop Liverpool’s fantastic run at full time.

Liverpool Manager Klopp was forced into making two changes from the 1-1 draw with Tottenham a 2 weeks ago, with Dejan Lovren’s head injury which see’s Lucas come into the side in place of the Croatian international.

Star player Philippe Coutinh did not return from international duty with Brazil until Thursday morning was dropped on the bench, with England international Daniel Sturridge leading the Reds attack.

The changes made at the either end of the pitch did not effect the Liverpool at all, Altough, the Reds found their rhythm after a very tough opening 10 minutes.

Liverpool soon began to take chances, with both Sturridge and Firmino looking bery dangerous – the latter giving Kasper Schemeichel his first task of the afternoon with a routine save.

Firmino won the next battle against the Foxes keeper at the 13 minute, however, opening the score with a fine and a simplistic goal.

James Milner was playing in his new left back position, he received the ball wide. Cutting inside, he then found the run of the Brazilian with an incisive pass. Firmino’s first touch sent Robert Huth the wrong way, his second doing likewise to Schmeichel, guiding it into the back of the net.

The goal relaxed Liverpool, whose attacking play began to shine. Gini Wijnaldum and Sturridge combined, though Sturridge’s final effort was not so good, before superb link-up play between Lallana and Sadio Mane teed up Sturridge. His near-post effort, from eight yards, was well saved.

Sturridge soon turned a provider, however, with Liverpool’s second of the afternoon.

Jordan Henderson’s raking forward ball isolated Danny Simpson against both Sturridge and Mane; the former picked up possession, found the pass for an unmarked Mane, who steered it in despite Schmeichel’s best efforts.

Anfield was as vibrant as its team’s attacking play todah, but was soon quietened when mistakes in defence allowed Leicester a chance. With little danger, Lucas attempted a square ball back to Simon Mignolet; it evaded the Belgian international, however, allowing Vardy the chance to tap into an empty net.

The Kop raged, and were soon raging further when Huth capitalised on uncertainty in the Reds’ defence, flicking on a long throw from Luis Hernandez on to the bar.

The Italian coach Claudio Ranieri made a half time change, and bought inAhmed Musa designed to inject even more pace into his lightning attack, but it was Liverpool who started the second period at breakneck speed.

Sturridge was denied by Schmeichel once more within 10 minutes of the start at the second half, but the Danish international could do little a minute later as Lallana lashed into the top corner from Wijnaldum’s lay-off to restore the Reds’ a comfortable two-goal advantage.

Leicester began to push for a goal to make the game a contest again, peppering Mignolet with high balls and set-pieces. Vardy had a big chance to do so, but his effort was well-saved by the Liverpool keeper, before Danny Drinkwater volleyed wide from a well-worked corner.

Henderson missed a glorious chance to make it four and Mane nearly bagged a second in the final minutes after some excellent work from Firmino, before the Brazilian ended the evening with his second.

With stoppage time approaching, a long ball was latched on to by Mane, who rounded Schmeichel and passed it to Firmino who put it in with no hesitation and made it 4-1 ending a much entertaining match.