Fans React On Twitter To The 1-1 Draw Between Manchester United And Arsenal, As Valencia Is Denied A Penalty 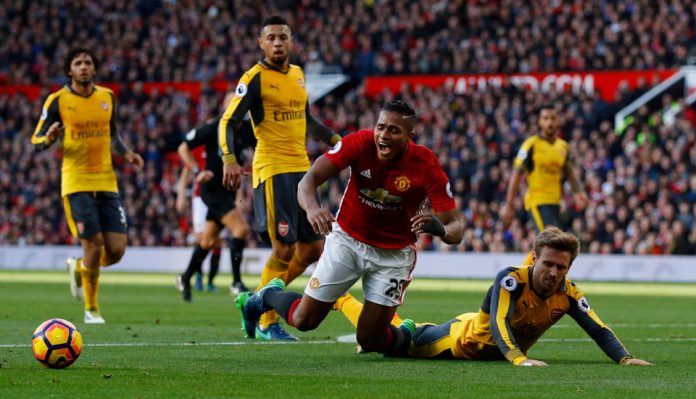 Olivier Giroud scored a late equalizer in the 89th minute of the game and earned Arsenal a narrowly escaped point. Juan Mata put the hosts in front in the 68th minute with a well composed finish. Both sides earned a point each but the actual talking point of the game was just before half time as Valencia was taken down in the box by Nacho Monreal.

The incident happened in the 35th minutes as Nacho Monreal and Antonio Valencia were battling for a ball that seemed to be out of reach of the Arsenal left-back but a tussle, between the two led to the Ecuadorian landing on the floor of the Arsenal penalty area.

“It was a penalty, just,” Giggs told Sky Sports. “I shouted penalty at the time. “And even though I think it’s soft and Antonio goes down easily, it should’ve been given.”He goes past him; Monreal puts his arm out and stops him.”

Former Gunner and Arsenal hero Thierry Henry also added to the debate, revealing he agreed with his old enemy Giggs. “I agree, I think it was a penalty,” he added.

Manchester United manager, Mourinho thinks yes, I think no, various friends of mine believe yes. What do you think about the incident “penalty” or “no penalty”?

However, here are how the fans reacted on Twitter to the match and the whole incident:

Far from even a good game from @Arsenal the team found a way to draw on a point. A result not have seen last year. #nevergiveup #ManUvsArs

Manutd team is going to be the next ambassador of peace because they don’t beat anyone. ? #ManUArs #ManUvsArs

I WAS NOT EXPECTING THAT.#ManUVsArs ??

Nobody notice but the leap from giroud outstanding …d determination , the drive …it’s a blessing #afc #coyg #ManUvsArs

After a very poor showing we are going to steal an undeserved draw at UTD. Giroud needed to come on earlier #ManUvsArs #ManUtdVArsenal

Lol”@Kingfeazy: That’s how @hayurbami will be quiet, waiting for arsenal to score, my boy is probably trembling right now.. #ManuVsArs“

Ref gives a foul against pogba for putting his arm across Sanchez but doesn’t give a pen for Monreal doing it to Valencia….Cheat#MUFC

Coquelin’s reaction after the Monreal foul says it all.
We are lucky the ref bottled that.

THAT’S A PENALTY!! Monreal’s intent is to foul Valencia and he takes him down. Fucking bullshit ??#MUFC

When u start paying your tithe “@lord_pros: Monreal desperately committed a foul and we got robbed. When will all this end ��”

Andre Marriner certainly likes Monreal too much. Again a clear foul but not given. #MUFC

Share
Facebook
Twitter
Pinterest
WhatsApp
Previous articleJose Mourinho Eyes Arsenal’s Defensive Target, As Manchester United Get Ready For Another Showdown
Next articleHas Real Madrid Boss Zinedine Zidane Lost His Marbles Or Is He Just Too Confident In His Team’s Ability?