One of the most dominant batsmen across the world in all formats of the game, Virat Kohli, the skipper of India is also an eminent style-icon for the youth of the nation. Out of all the statements made by Virat through his bat or his attire, one of the most striking discussions amongst his fans was the interpretations of his tattoos. Hence, in an attempt to declassify the patterns inked on the run-machine’s body.

Beyond The Post summed up a picture of the same and started digging. Here is what the upshot looks like.

The first tattoo that we will start with is on the triceps of his left hand. It is his father’s name penned in Hindi. Prem Kohli, his father was a criminal lawyer by profession and also played an astronomical role in egging his son to take up cricket as a career.

The tattoo that comes right below it is Virat’s mother’s name, Saroj. On an occasion to celebrate the women’s contributions in the daily lives of human beings, the Indian cricketers donned on a jersey with their mother’s names. Hence, that played out as the answer to the question of Saroj written on Virat’s left-hand triceps.

Virat’s response to these tattoos was attributed to the inexplicable connection that he has felt with his parents.

The next tattoo on his left bicep is of a Japanese Samurai. According to Virat, he had to fight for everything in his life and all his choices came at a cost. Hence the tattoo on his left bicep works as a reminder for him to strive harder and pursue greater heights. Kohli also believes that he shares a few tenets of the Samurai which comprises the Bushido code. The seven virtues of the code are Gi (Justice), Yu (Courage), Jin (benevolence), Rei (politeness), Makoto (Honesty), Meiyo (Honour) and Chugi (loyalty).

Once again on the left-hand triceps right next to his parents’ name, he has got the numbers 175 and 269 inked. Virat was the 175th ODI cricketer and the 269th Test cricketer to play for India. When asked about the same, Virat explained that 200 years down the memory lane if someone chooses to look back at the numbers, King Kohli will always remain there.

Virat’s right arm has got a tribal art inscribed which denotes crude uncontained aggression. When the Indian skipper takes the pitch leading the charge, we all know the magnitude of destruction that he is capable of unleashing.

In the skipper’s right bicep, Virat Kohli has his sun sign intaglioed as it reads Scorpio. One of the primary attributes of the sun sign is the ability to lead and we are all aware of the leadership flair which Kohli has been showing India.

On his left shoulder, Kohli has God’s eye inscribed on it which reminds him that no matter wherever he is, he will always be observed by God. He thereby chooses his actions with distinction and ensures that they are carried out with nobility.

Lingering on the borders of the God’s eye, Kohli has an “Om” inked. “Om” is denoted as the universal sound of the world and represents humility. The Indian run-machine believes that this tattoo is a reminder of him staying close to the ground and also will serve as the essence to life. 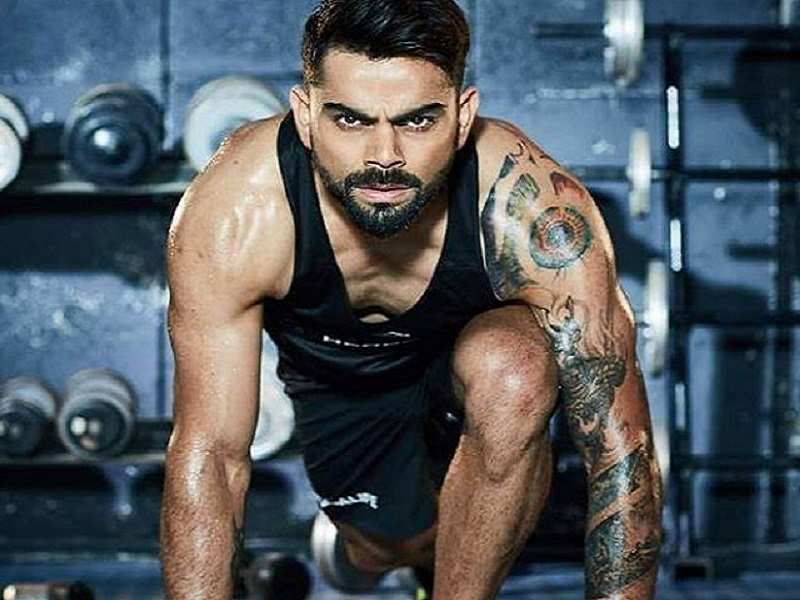 Kohli’s left arm has Lord Shiva inscribed on it. Lord Shiva is surmised to be the god of destruction while also being the epitome of calm when he meditates on the mountains of Kailash. This is singular gentry, which if mastered in perfect proportions can create a perfect human being according to Hindu mythology.

The tattoo that borders the inscription of Shiva is that of a monastery which apparently helps King Kohli to keep calm. With the love and the hopes of Indian fans, it is not easy for the Indian skipper to keep calm.