Rohit Sharma needs no introduction. The “hitman” has been one of the best batsmen in world cricket, his lazy elegance and approach to the game have seen him jump to the pinnacle of World Cricket in double-quick time. He has gone on to become the scourge of many bowlers, some of whom are considered to be the best in the business. Rohit has been one of the torchbearers of this new generation of Indian cricket, and its unparalleled success in recent times. However, even he is not immune to the perils of social media hacking that has been the bane of so many people across the globe.

It seems that earlier today, Rohit’s Twitter account has seemed to be hacked by an unknown source. While cricket lovers, and more precisely, Rohit fans were hoping for some sort of a tweet that showcases his and his team’s preparation for the upcoming test series against Sri Lanka which begins in Mohali on Friday, they were in for an absolute shocker when they saw the tweets from his account. His Twitter feed shows 2 very strange tweets that have been published in the space of 5 hours from some source called “TweetDeck”. 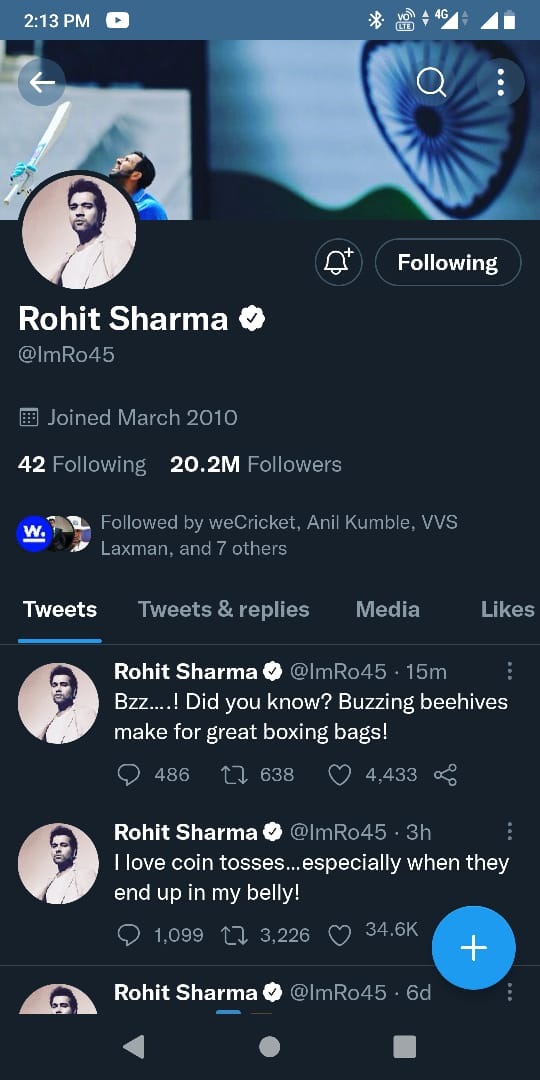 Rohit Sharma Can Handle Team India But Can He Handle A Twitter Hack?

Both Tweets were absolutely hilarious. One bordering on borderline cringe but got a lot of people rolling in splits after reading those. The first Tweet read, “I love coin tosses….. especially when they end up in my belly”.
This is a very hilarious play on both his ability to win tosses at a high rate. As well as the constant jibes he receives due to his perceived lack of fitness. If that was all, then you are definitely mistaken.
Hours after the first Tweet was published, another one surfaced on his account. This one was even more bizarre than the first. This particular Tweet read, ” Bzzzz… Did you know? Buzzing beehives make for great boxing bags!”.
Well if that’s not all, then this one will definitely leave you gasping for breath, in the most recent tweet, it says, “Cricket balls are edible….. Right?.”
Either this is a sick joke by a hacker or some of the kids have taken charge of the cricketer’s account. Whichever it is, the media and fans are having a field day at present!!

These Tweets have already gone viral, which each tweet getting close to an average of around 500 to 1000 retweets. Each tweet has its own set of comment comedy going on as well. Safe to say that these joke Tweets have generated quite a “buzz” among the Twitterati today. And we are all for it.
All in all, this is a very hilarious instance of a sports personality’s Social Media getting hacked. It has been generating some laughs for the general public, with no cricket played. However, we hope that the issue is resolved soon before this goes from funny to ugly.
Share
Facebook
Twitter
Pinterest
WhatsApp
Previous articleLatest: The Major Difference Between Shivratri And Maha Shivratri
Next articleBarcelona Lock Horns With Arsenal And Manchester United For Ruben Neves