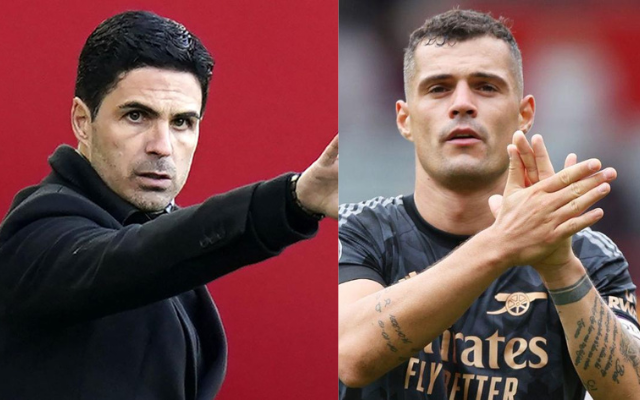 Arsenal news: Big things were expected from Granit Xhaka when he joined the Gunners from Bundesliga club Borussia Monchengladbach during the summer transfer window of 2016.

However, he failed to live up to his expectations and was close to moving away from the Emirates Stadium during the summer transfer window of 2021. The 29-year-old midfielder also fell out with the club’s supporters when he swore at them after being substituted midway through the game against Crystal Palace in 2019. He then removed his jersey and taunted the supporters with his arms to boo louder. Unai Emery removed the Swiss international from the captaincy after the incident.

However, he ended up staying at the club and has slowly worked his way back into the Gunners’ starting line-up. He also captained the team in the absence of Martin Ødegaard in a league game against Brentford FC last week.

Mikel Arteta offered him a new contract during the concluded stages of last season, which will keep him at the club until the end of the 2023-24 season. The Spanish manager received a lot of criticism for his decision to extend Xhaka’s deal. But he proved everyone wrong as the Switzerland international is among Arsenal’s most improved players as they are flying high in the Premier League this term.

Arsenal news: Xhaka named Arteta as the reason behind his Emirates stay

Speaking to Players Tribune, Granit Xhaka revealed that Mikel Arteta pursued him to stay at Arsenal in 2019.

He said: “When Mikel was appointed, I told him that I wanted to leave. He understood completely. We had a second chat a few days later & when I went in, I had talked it through with my wife. Our suitcases placed by the door. It is very difficult to change my mind. He further added: Then Mikel began to talk about how I was a big part of his plans. I liked his warmth. He was honest, straight. Clear plans. I felt I could trust him. He told me to give him six months to prove me wrong & then if I still wanted to leave, no problem”.

The Spanish manager has used the Switzerland international in a more advanced role this season, which allowed him to flourish. His experience and versatility will play a key role for the London club as they look to challenge for the Premier League title this term. Xhaka has started all of the Gunners’ league games this season, registering one goal and three assists. He also started the London outfit’s opening UEFA Europa League encounter against FC Zurich earlier this month.

The Gunners have started the current season brilliantly, winning six of their opening seven games in the league. They are sitting at the top of the Premier League table with 18 points from seven games. The London outfit will next lock horns against Tottenham Hotspur in the league before facing FK Bodø/Glimt in the UEFA Europa League on October 7. Meanwhile, Granit Xhaka is currently fulfilling his international commitments with Switzerland.