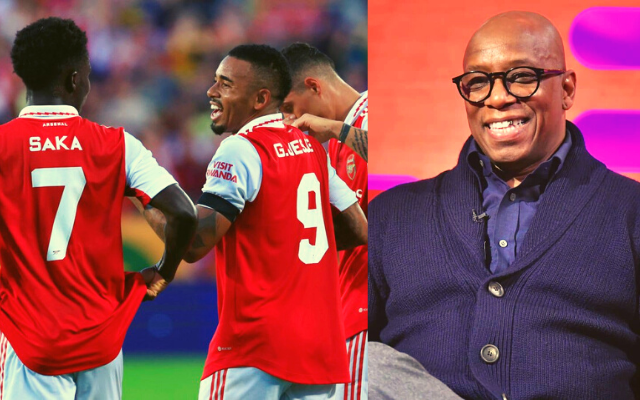 The Highbury legend loved how Saka caused “chaos” in England’s 3-3 Nations League tie with Germany. Saka has moved to the right side of attack and is now one of the first names on Mikel Arteta’s team sheet for Arsenal.

But the Arsenal star had to play left wing-back when England lost to Italy in the Nations League. Even though Saka worked hard, he was never going to be able to change the game from where he was.

Then, in England’s game against Germany on Monday night, Phil Foden started instead of Saka. Against the four-time world champions, the Three Lions played much of the time where they looked like they were going to win.

Then, in the 66th minute, Saka came off the bench and helped bring England back into the game. When the player from Arsenal came on, Germany scored through Kai Havertz to make it 2-0 for the away team.

But after Luke Shaw scored for the home team, Mason Mount tied it up with a through ball from Saka. With more goals from Harry Kane and Havertz, the score was tied at 3-3.

What did Ian Wright say about the Arsenal star Bukayo Saka?

Saka started a strong run halfway and almost won it in the last few seconds. The 21-year-old player for the Gunners made Marc-Andre ter Stegen make a fingertip save to keep the game tied.

Wright said that until Saka and Mason Mount came on, the game was “boring.” The Arsenal great then said that he liked how “chaotic” England was going into the World Cup.

Wright came to the conclusion that it means the group can be brought together.

He told Wrighty’s House, “Yes, that’s exactly what it is, and it was boring. You want chaos, and Saka made it happen in Germany. I also really liked Mason Mount, who also came in.

I like that we’re going into a tournament with this crazy ‘our manager isn’t good enough, why is Harry Maguire going? Why did he not choose Tomori!’ I like this idea because it can bring this group together.”

The future of Bukayo Saka, a star player for Arsenal, will be talked about for a long time. Or at least until he signs a new contract with Arsenal.

Saka’s current deal is up in less than two years, and Arsenal wants to sign him to a longer deal. But as long as he doesn’t sign a new deal, other clubs will start looking at him. Jurgen Klopp, the manager of Liverpool, is one of many who likes him a lot.

football.london has heard that Arsenal is sure the young player will sign a new, lucrative contract to stay in north London. Saka has also hinted that he will sign a deal to stay at Arsenal. After his team beat Fulham 2-1, he said, “Yes, I share his [Arteta’s] confidence.” That does not stop people talking about his future though.”