Revealed: The Only Positive Thing That Gary Neville Has Said About Arsenal This Season 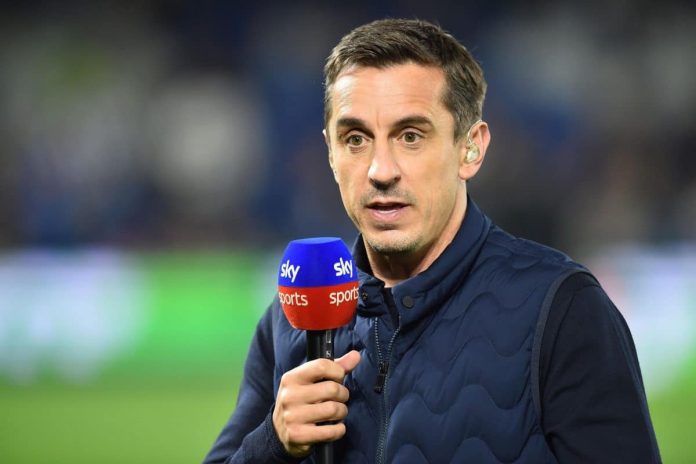 If there is one commentator and Pundit that Arsenal fans ‘hate’ the most at present, it was to be none other than Gary Neville. The former Manchester United right-back has been a pain to Gooners all across the globe. His comments have been hurting the sentiments of Arsenal fans for months now. And this all began last season.

The ex-England international has been constantly spewing hate for Manchester United’s fierce rivals. Generally, most Pundits speak for both sides of the table. However, Gary Neville just can’t seem to do that.

This has been highlighted on Social Media s well and the former player just keeps getting trolled. And he knows it really well. He knows what he is doing. Yet, keeps on poking Gooners with various random comments. Most of these claims and predictions don’t make sense.

However, one of the predictions that ended up being true, was that Arsenal would not finish in the top 4. This helped Gary Neville retain some credibility. If not for that, he would have been the BANTER HOUSE for all Gooners.

What was the only positive comment from Gary Neville in recent times about Arsenal?

Gary Neville finally got tired of nagging all the time and decided to be a bit generous this time. He has been constantly criticizing Arsenal, though they are on top of the Premier League table. This was something that was not really going down well with a lot of fans.

Even some of the neutrals could see the hate that the man was spewing. However, for the first time heading into the World Cup break, Gary Neville decided to be smarter.

Here is what he said-

✍️| Gary Neville: “I said last week that I thought Manchester City would win the title by 15 points – I’m going to hang in there with that prediction. But Arsenal are making me doubt that. They’ve been fantastic, they are the class act of this first 14 games.” [@SkySports] #afc

Well, this must surely be a surprise to Arsenal fans now. At least, Gary Neville wants to now have a peaceful time and wants to enjoy the World Cup in Qatar like everyone else. He doesn’t want the fans hating him at present. This is while he addresses some pressing matters, like Gareth Southgate’s faults.

So the attention is away from Mikel Arteta now. It’s time to focus on who did wrong, elsewhere. The 47-year-old Englishman already has a lot of hate in his plate, with even former team-mate Cristiano Ronaldo ghosting him.

Time to move forward and try to BRING IT HOME?

It’s time for everyone to focus on the World Cup. This is one-off tournament that is in mid-season. What Arsenal does or does not, shall be seen post the competition. With that being said, Gary Neville too wants to sit back and enjoy the tournament. He does not want fans calling him out constantly, with the season on a break.

Keeping that in mind, it should be a great fight for football’s ‘most-coveted’ trophy this year. It could end up being quite evenly matches. Though, Brazil are the favourites to win it, in the eyes of a lot of fans. Let’s wait and watch what happens now!!