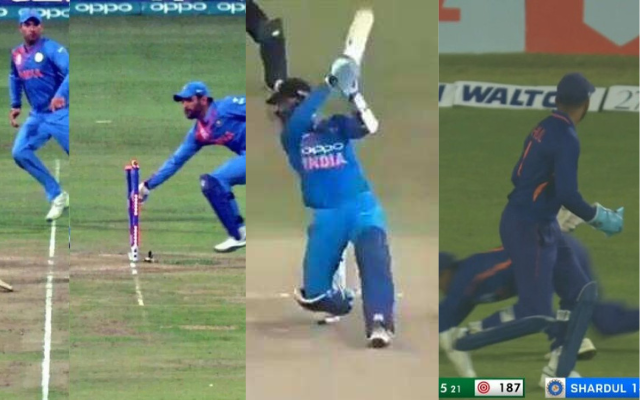 The formidable Team India, led by Rohit Sharma and including Virat Kohli and KL Rahul, was defeated by Bangladesh by just one wicket at Mirpur. In the first ODI of the series on Sunday, an undefeated 51-run partnership for the 10th wicket upset India. However, India also made several blunders. The most egregious of which occurred during the match-winning stand and left Rohit seething.

Mehidy Hasan Miraz, batting for Bangladesh, escaped dismissal for the second time in the 43rd over of their chase when he slashed the wider ball from Shardul Thakur into the skies. Sundar, an India bowler, was fielding at third man, but he made no attempt to run in and catch the ball. After the ball landed on the ground, he casually walked over to pick it up. After seeing how poorly the team fielded, Rohit was livid.

What pushed Rohit over the edge was the fact that Mehidy had just hit a similar shot off the previous ball from Thakur. KL Rahul, the wicketkeeper, made a beeline towards the field in an attempt to finish the catch, but he fumbled the ball.

Feel sad for KL man somehow gets the blame even after playing well😭😭 https://t.co/Uqmu8bhxBh

KL Rahul should listen to his mother and continue his government job rather than playing cricket for Indian team 👀👀 https://t.co/hahcXQz3eb

Being a Sri Lankan I wasn't watching the match hence that last picture caught me off guard. 🤭 https://t.co/cCpuOD8Z8p

What does KL Rahul has on BCCI?? https://t.co/GK4pIx9pfG

At the post-match press conference, Rohit said: “The game was very close. We did pretty well to get back to where we were. We didn’t bat well. 184 wasn’t enough, but we bowled pretty well and they kept them checked in the end. If you look back at how we bowled from the first ball on, we could have done better at the end, but for the first 40 overs, we did pretty well and got wickets. There just weren’t enough runs. It would have helped to have another 25–30 runs. After the 25-over mark, we thought we might get 240–250. It’s hard when you keep making mistakes. We need to learn how to play on these kinds of wickets. We don’t need an excuse because we’ve been through this before. I’m not sure how much they can get better with just a few practice sessions. I think the genes are there, and it’s just a matter of being able to handle pressure. I’m sure these guys will figure it out, and we can’t wait for the next game. We hope that we can make things better. In this situation, we know exactly what to do.”

Summary of the game:

In the end, it turned out to be a fun game. Started with some tackiness with India struggling. Shakib took an incredible five wickets under his command. KL Rahul posted a respectable 73 after a long day on the course. India placed pressure on Bangladesh by taking advantage of the pitch’s assistance for both their pacers and spinners.

The collapse was initiated with Litton Das’s wicket. Since then Bangladesh has lost seven wickets for a total of 62 runs. The fervent home audience was astonished as India coasted home. But Mehidy kept lifting their spirits with each shot he played. Demonstrated that a determined batter can still drive in runs on this pitch, with the help of a little dew near the finish. It would have been worse for Fizz to attempt to slog and let his partner down than to provide some crucial glue at the end.

Share
Facebook
Twitter
Pinterest
WhatsApp
Previous articleWhy Ronaldo Has A Better Chance Of Making It To The FIFA World Cup 2022 Final Than Messi
Next article“He Will Definitely Seriously Consider A Move To Arsenal”, Former Manchester City Star Set To Join Arsenal In January