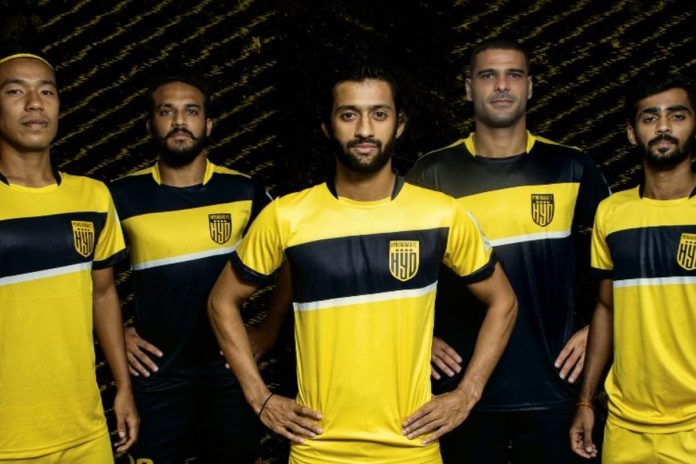 ATK Mohun Bagan’s quest to an unchartered territory of 6 wins in a row comes to an end in the hands of 10 warrior men of The Nizams of Hyderabad at the Tilak Maidan Stadium. ATKMB needed the win to make sure their aspirations of winning the league shield. And gaining direct qualifications into the group stage of AFC Champions League remained intact.

While Hyderabad FC required three points more than ATKMB to boost their chances to qualify for the top 4. They have Northeast United FC breathing down their neck. It wasn’t meant to be for either side as ATKMB made a comeback twice with brilliant goals. Both were set up by David Williams as Hyderabad FC extended their unbeaten run to 11 games.

First Half: Early set back for Hyderabad FC

ATKMB set up in a 4-4-2 on paper but looked like a 3-4-1-2 with Williams drifting wide to the left half-space constantly. Hyderabad FC set up in a more traditional 4-2-3-1 with Aridane as the target man. Things went south for Hyderabad early on as Chinglensana Singh was sent-off in the fifth minute. He pulled down Williams who was through on goal from an error of Odei. The red card didn’t stop the attack-minded Hyderabad FC as Aridane striker’s instinct was on point. He latched onto a loose ball from a misunderstanding between Pritam Kotal and Tiri as he put it past Arindam, who could have done better in goal.

Hyderabad FC didn’t retreat after the goal and played with a relatively high line in a 4-4-1 formation in defence. Aridane was in the thick of things as he won 7/12 aerial duels in the match, flicking it behind the Center-backs for the pacey Liston and Halicharan to run onto the ball.

ATKMB couldn’t capitalize despite being a man ahead. They rarely found Roy Krishna who was on the last man’s shoulders as always. Akash Mishra joined the midfield for numerical superiority. That was while Nazary maintained width. Jhingan and Bose found it difficult to contain Aridane and Liston. That was the case as Hyderabad threatened on the right flank.

ATKMB slowly grew into the game. They started doing more after the drinks break. They were then winning the midfield battle. Switching things back to a traditional 4-4-2(4-2-3-1), they tried to push for a win.

However, they failed to create clear-cut chances. Hyderabad could have had one or two goals. That was going into the break as Liston’s decision-making was poor. He could have squared it to Halicharan Nazary twice. 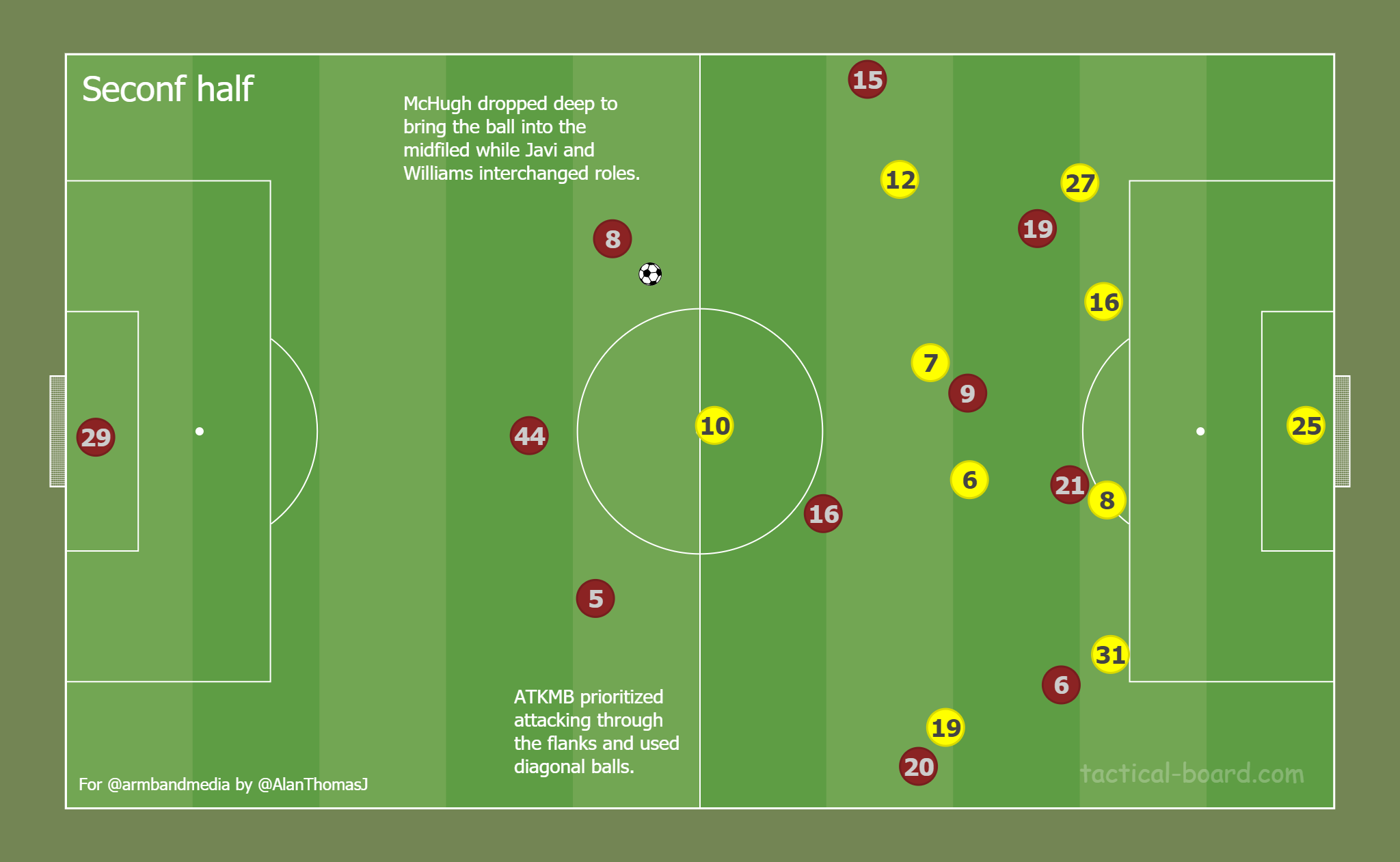 ATKMB made changes at the start of the second half as Tiri and Jhingan switched positions to contain Aridane. Jayesh Rane came in for Lenny Rodrigues and they shifted to a 4-2-3-1 with Williams behind Roy Krishna. ATKMB started to control the game more and reaped reward when a delightful ball from Williams found the overlapping Manvir who finished it magnificently as Kattimani had a brain fade moment. Even with ATKMB’s control, Aridane kept on winning the aerial duels as Hyderabad kept on knocking on Arindam’s doors for the second goal.

The moment’s after Jhingan had to leave the field in what looks like a hip injury. Aridane won another duel with Pritam Kotal (who was playing centre-back) to setup up Alberg who’s first touch resulted in a goal in the 75th minute. It looked like the winner but David Williams had different plans as he played a delightful backheel to Jayesh Rane as he curled one to the far post and Kattimani spilt the ball and Pritam Kotal (who looked offside when the shot was taken) buried it in the stoppage time to increase their tally by 1 to 40 points. 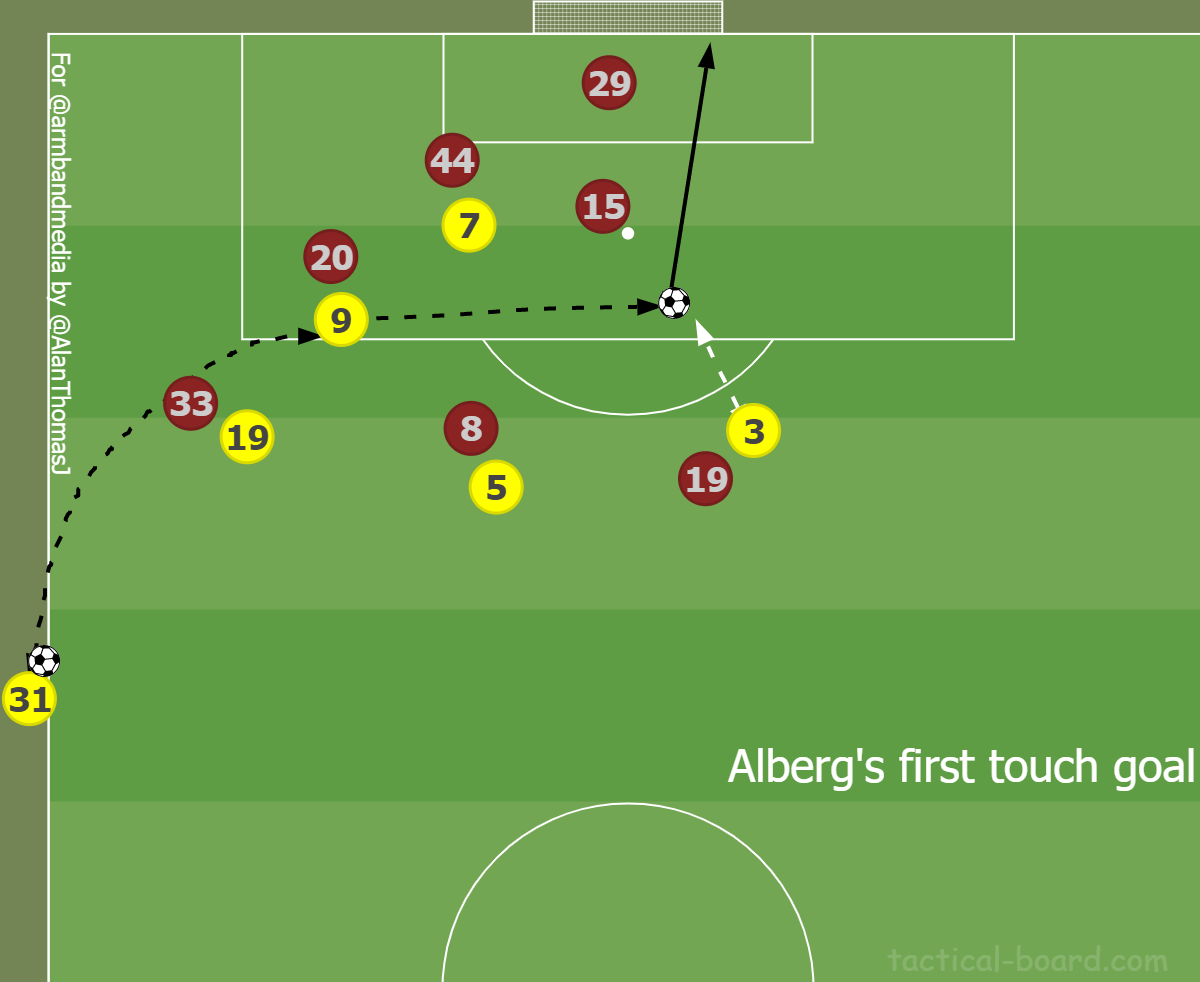 Goalkeeping errors cost the match for Hyderabad. They could’ve had a brilliant result going into the last league game against FC Goa. That match looked like a finale. That is if they had only held on for another three minutes. ATKMB will be the happier of the two sides.

They couldn’t capitalize with the extra man. However, they go into their final league game six points clear of Mumbai City FC. Any result other than a loss will guarantee them the League shield and qualifications into the AFC Champions League. 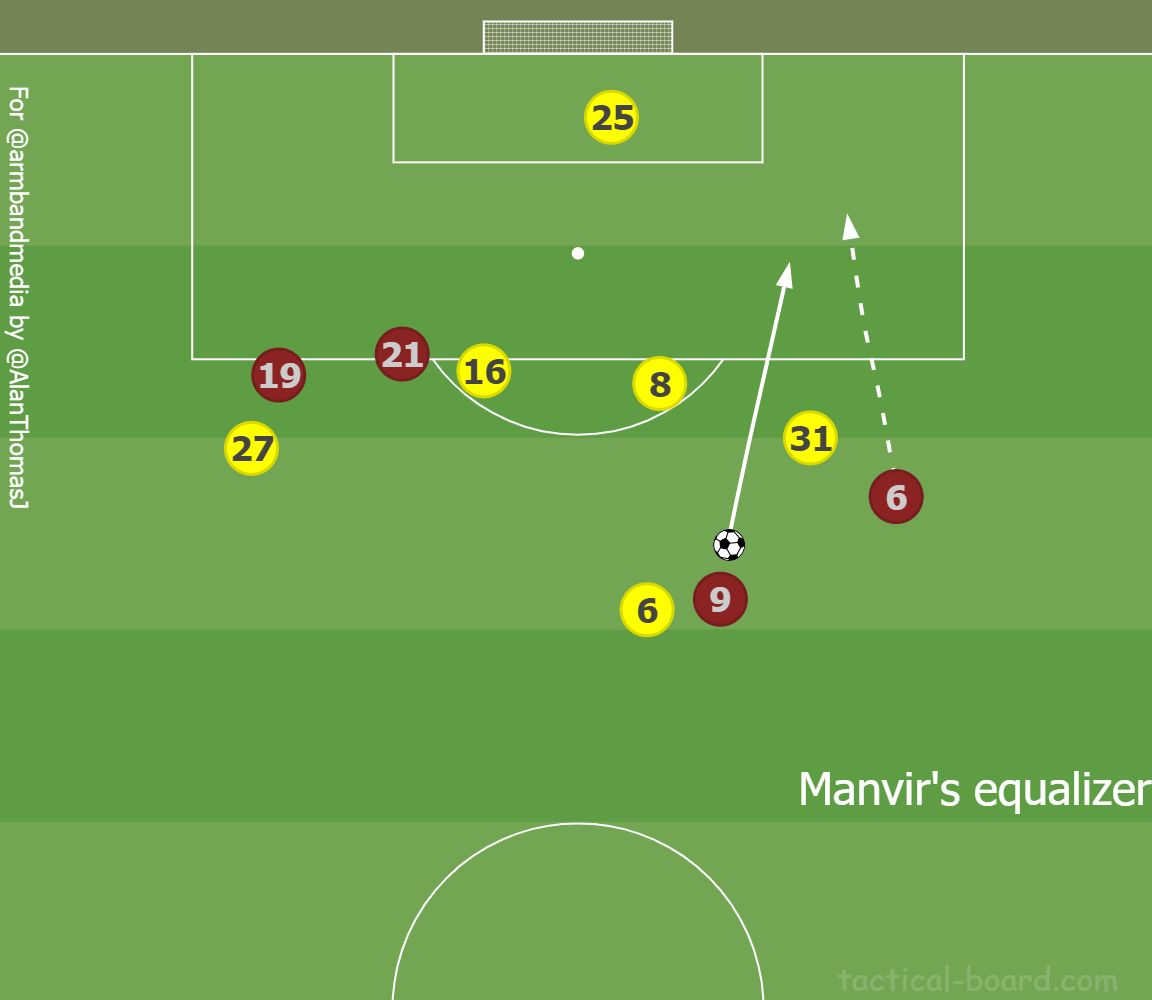 Man of the match (Hyderabad FC):

Aridane for the goal for sure. Also, setting up another one in another impressive outing. He now extends his league tally to ten goals and two assists.

ATK Edge Past Bengaluru FC To Go To The Top Of...