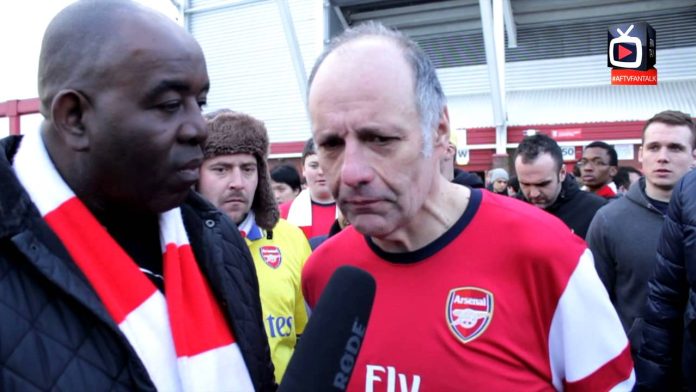 Missing Claude-Claudiola- What makes a legend!? There are various attributes that combine together and fall in place to determine that!! Whether it is a player, a former player or just another member of the club’s community, each and every individual can impact life in itself. Time does play a part but there is more to human emotion than just what the clock reads. There is effort, a mutual exchange of thoughts and ideas and the desire for more.

Then there is a passion for the club. Something that tops it all off. The desire for the team to succeed if not win every damn title!! Though that is not quite possible every season, “HOPE” is a big word that Arsenal fans love to cultivate. The hope of success versus the pessimism of inevitable failure!!

Not everyone knows how to keep the positivity and optimism going. Yet, for some, the success of the club matters more than anything else. A mutual give and take of respect and love for the game in itself!! That’s where Claude would come in!! Social Media is not an easy place to be. YouTube, Twitter and other platforms have their own pros and cons. It is always a battle to fight, grow and prove one’s worth. Though I have never been a fan of YouTube and YouTubers in all honest, being a friend is different. That was the thing with Claude.

Below is the link of his last stream on his channel-

Though I have never met the guy, I feel connected. We barely talked about Arsenal in our general conversations off-air but he would still listen. People make their own choices and decide what they want in life. At the end of it, we both did what we felt was right. However, the ability to listen and appreciate another person’s opinion was something that Claude was best at doing. Agreeing or not, is a separate thing. However, there is a classy way to disagree too. I personally always felt that respect while talking to him!! I hope you guys did too!!

Next, love for the club was always a priority!! Nothing was bigger than that. No player, no fan. No one. Differences in opinion did always do the rounds, yet nothing that a good debate or discussion could not resolve!! He was like a father figure to many. Hence, the loss may hurt the “emotional fans” more, than I can actually imagine. Yet, the idea is to stay strong and fight. Make yourselves and him proud of you!! That is what he would have wanted.

The Problems With Twitter And All The Negativity Surrounding It

Social Media platforms like Twitter tend to break people. A lot of negativity can impact someone’s mental health over the course of a certain period of time. However, with Claude, most of his pain came from the AFTV incident. It hurt him quite a bit but it showed him the light. True friends and friendships, his actual fans and admirers stood tall with him. A new direction to his life indeed.

RIP Claude 😪😐Lived like a king!! May you find peace wherever you are..Glad to have called you a friend!! #Apoz

Everyone has issues in their lives, yet Claude was a fighter. Poor health could never keen him down. He always had that energy and aura about him!! That is something that he would want all his admirers and fans and friends to do. Fight!! Never give up. Not to any negativity online or offline. Life is a gift. Use it to the best of your abilities. The privileged don’t realize its worth!! Claude lived like a king despite his pains. He showcased a great example of humility in success.

The man would talk to anyone and everyone who had a good vibe. Positive and appreciating. Caring like a father and would take out time to have a chat. Discuss football and more on and off stream. That is why his channel was growing. People liked him more and a lot of them switched platforms when he left AFTV. Such was the pull!!

Checking On His Subscribers Every Now And Then

I remember an incident when Covid was in full flow and a few of the guys were not well. Claude would check on them when he saw them in the chats. There is enough proof of his caring nature as a person. A lot of you including me will probably miss that side of the man. It made him who he was, even more.

Humility with that Italian flare that could turn into a rant against Arsenal’s poor play at any time!! That fiesty nature to have his opinions heard. Something we have known him to do over the years, along with unmatched passion. No wonder Arsenal had to respond themselves and pay their respect to the man!!

Sending our condolences to Claude’s family, friends and everyone who cherished him

Our thoughts and prayers are with the family. His close friends know that I will always check on them (the ones I know and am connected to). Even they have done the same with respect to me and I am grateful. To all the ones who have lost a father-figure, stay strong. Be proud of who he was and he would have been of you, your love and care!!

However, for anyone who is feeling low or wants to share, just drop me a text on Twitter. We can talk. That’s what Claude did best!! He talked. Most times. Talking helps!!

One Request At A Personal Level From Me To The Fans

Please stop this. Wake up to facts and grow up for once. This is not something that should be done by mature individuals. We are all Arsenal fans and blaming anyone including the family makes no sense. Thanks.

3 things people need to do-

Stop your stupid assumptions about Claude & wait for facts!!

Focus your attention on your life & stop fighting on Twitter over this!!

For now, we can all just hope that Claude is at peace. He was a good man and lived like a king. It’s time to remember him as one in our hearts, for the rest of our lives!! What a legend and as he would always say, “It’s time to go!!”