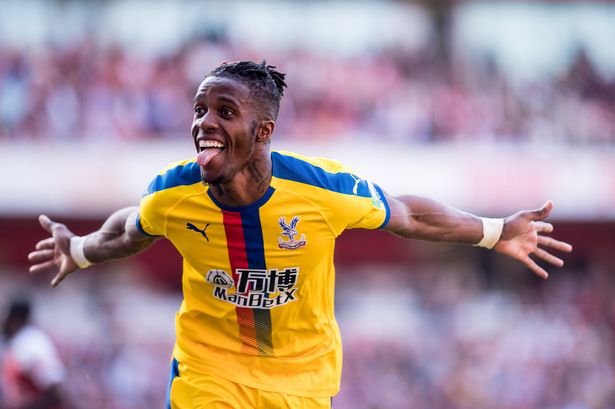 According to the reports from the summer, Premier League side Arsenal faced stiff competition from Merseyside club Everton in order to sign Crystal Palace superstar Wilfried Zaha in this summer transfer window. The Gunners had not met Palace’s demands over the transfer fees for the English winger and Everton were looking to put the pressure on the North London side. Though that was the case, The Eagles had suggested that they would prefer to sell to Chelsea or Manchester United.

Ever since Unai Emery took charge of Arsenal back in the summer of 2018, he has had quite a mixed bag in his debut season in England. The Spaniard took over the reins from the legendary Arsene Wenger who was at the helm for 22 long years and the 69 year old Frenchman won several major honors including three Premier League titles and seven FA Cup’s during his time as Arsenal boss.

Wenger got Arsenal competing once again but towards the back end of his career with the English side, he wasn’t able to adapt to the newer generation of managers and the latest trends in football. The club was not moving forward and even the Arsenal faithful were getting sick of Wenger’s failure.

The club was in dire need of fresh air at the club and following Wenger’s departure, Emery provided some much needed fresh air into the club. The 47 year old manager implemented his tactics and philosophy into the club initially and most of his summer signings hit the ground running. Emery took Arsenal on an unbeaten 22 game streak across all competitions and a top four berth looked quite certain until a late collapse towards the back end of the season pushed them to fifth.

However, Arsenal had another chance of making it into the lite tournament if they beat local rivals Chelsea in the final of the Europa League. A 4-1 hammering at the hands of the Blues indicated that there is plenty of work that needs to be done for Emery over the summer and beyond to ensure that Arsenal can win silverware in the near future.

The Gunners have already signed Gabriel Martinelli and William Saliba will join the club next summer. Dani Callebos has also joined Arsenal on a loan deal from Real Madrid and Nicolas Pepe became the latest Arsenal player yesterday. However, Emery still wanted to bring in another player in the form of Wilfried Zaha in the summer, though things were not easy.

The 25 year old English winger has been the standout player for Crystal Palace over the past few seasons and looks destined to play for Arsenal after Zaha admitted that he was a fan of the club while growing up. Arsenal have already had two offers worth £40m and £50m  rejected by Roy Hodgson’s side as Palace are holding out on an offer worth around £90m for Zaha.

Wednesday: Zaha hands in a transfer request, per @SkySports 👀 pic.twitter.com/b3xgohav3w

If Arsenal are to sign Zaha anytime next summer, they need to act fast as Merseyside club Everton have shown some keen interest in the Palace attacker. Marcos Silva wanted to add some strength to his attacking department and Zaha is on his wish-list.

However, Palace had stated that they would prefer to sell the player to either Chelsea or Manchester United, though the attacker was not really interested in joining the Red Devils once again.

Revealed: Former Arsenal Manager Had Made This Statement About Granit Xhaka