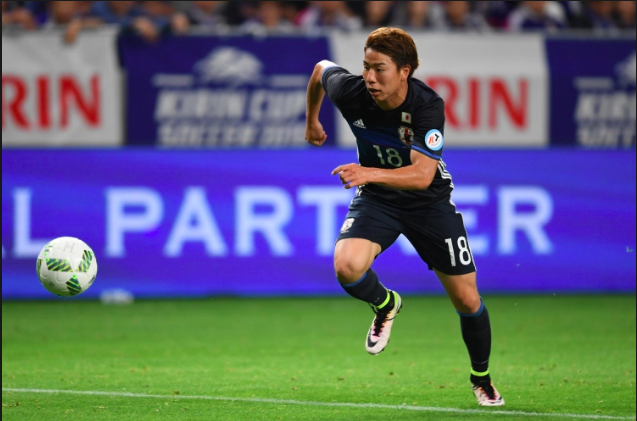 Arsenal boss Arsene Wenger has now come forward and made a statement that might give summer signing Takuma Asano a lot of confidence, as the French manager feels that the attacker will be a huge hit at the Emirates, in the near future. The 21 year old forward joined the Gunners from Japanese outfit Sanfrecce Hiroshima some time ago, as Wenger looked to strengthen his attack.
Since his move to England, Asano has been away on loan to Bundesliga club Stuttgart for the current campaign, with the hopes of developing his skills in Europe.
Further, the Arsenal main-man has encouraged the player by revealing the reason as to why he brought the striker to north London.
In a recent interview with Arsenal Player, talking about the move he cleared out things and said, “What I see in him is the quality of his runs, his pace, his body strength and he is quite aggressive.”
“You do not find many players today who go behind the defenders at every opportunity.”
“That is one of his strengths. I must say, I’m personally a strong believer in him, because by coincidence I met the national coach of Japan and he is absolutely convinced by him.”
The Londoners face off against Southampton at home at the weekend and will want to pick up all three points, after not the best of starts to the new campaign.
Wenger’s side finished in second place in the top flight of English football last term and have just managed to pick up a single win in their opening three games.
They will be looking to change that, as they hope to challenge for some big titles in the current campaign, after ending a trophyless last season once again.

Nikola Kalinic, Victim Or The Villain For Croatia At The World...