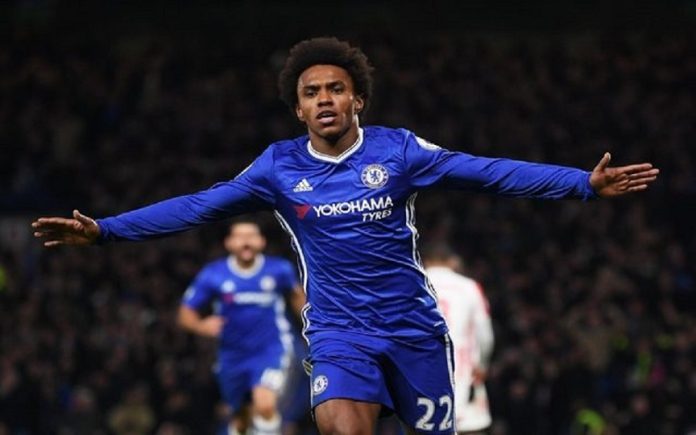 Wow!! Will This Deal Happen??

Amid all the talks relating finding a replacement for Brazilian superstar Neymar, a new name has been popped up. Barcelona are now looking at Neymar’s national team-mate to replace the winger, and no its not Coutinho. Chelsea’s Willian has been the latest target identified by the Catalonian club to fill in the void left by the now Paris Saint Germain man.

Chelsea may be a bit worried over the potential links a few of their players have towards Barcelona. The Spanish giants have already made it public that Eden Hazard is a suitable winger to join the Copa Del Rey winners but after rejecting any bids for the Belgian play-maker, they will now have to deal with an offer for Willian.

With the Blues having a rather underwhelming start to the new campaign, it is unlikely that Chelsea boss Antonio Conte would be willing to lose another player this summer transfer window after key midfielder Nemanja Matic left for rivals Manchester United as well as club legend John Terry, who now plays for Aston Villa.

But when Barcelona coming knocking at your door for a player, it is very difficult to turn them down, especially when they are willing to bid at a very high transfer fee. Willian is also not the first-choice preference at Stamford Bridge under Conte, which could see a move taking place before the transfer deadline day.

Willian, who was once with Shakhtar Donetsk made only 15 starts last season as the London outfit won the Premier League with Conte preferring ex-Barcelona man Pedro over Willian. There was also a possibility that Willian could have joined Manchester United earlier this summer, but the 29 year old forward said there were no talks held between the two clubs.

“There were a few conversations with my agent. I worked with Mourinho and I became his friend as well,” Willian said.

“He likes me a lot and I like him a lot as a coach and as a person.

“He has put his trust in me and in my work, and I was very grateful to him.

“Manchester came to me, they talked with my agent, but nothing happened, because Chelsea would not negotiate me in any way and I’m very happy at Chelsea.”

Barcelona can make any players head turn with offers to play for them at the Camp Nou. And with talks already taking place with Chelsea over Willian, the Brazilian compatriot could become the heir to his national team captain.

Should The Blues Let Go?

If the west London outfit does manage to sign a player like Alex Oxlade Chamberlain from Arsenal, then they might possibly let go of their star player, as they could consider the possibility of cashing in on him. The Gunners’ winger is coming to Stamford Bridge for regular football and the opportunity to win more titles.

Hence retaining Willian at that point of time would make no sense, though there is no doubt that he is equally talented as well.

It would only hamper the development of both stars and whatever Conte does decide now, we at Beyond The Posts will report it.