According to the latest reports, the Premier League duo of Chelsea and Arsenal are keeping tabs on Paris Saint-Germain right-back Thomas Meunier over a potential transfer in the upcoming summer window. The two London sides are heavily interested in signing a solid full-back that can provide quality in attacking and defensive situations and Meunier has also stated that he wants to leave the Parc des Princes.

The Story Involving The Top Clubs In England

Ever since Unai Emery took charge of the Arsenal football club back in the summer of 2018, he has done quite an admirable job by replacing his legendary predecessor Arsene Wenger at the helm. The Spanish boss has led Arsenal to the semi-finals of the Europa League and also with a chance to finish inside the top four in the Premier League.

Almost every summer, the signing that Emery made hit the ground running at the Emirates barring Stephan Lichtsteiner. The 35-year-old endured quite a torrid time and looks set to exit north London at the end of the season. Therefore, Arsenal is looking to sign a right-back who can compete against Spanish full-back Hector Bellerin when he returns to full fitness. Ainsley Maitland-Niles can also be pushed forward into his natural midfield position. 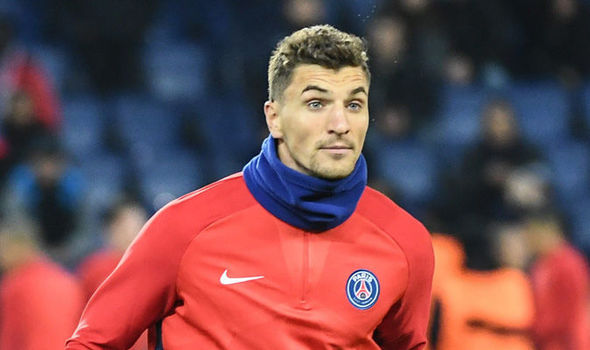 Even Chelsea boss Maurizio Sarri has done quite a commendable job with the Blues in his first season in charge as manager of the club. The Italian master tactician has instilled his effective and attractive brand of football into the West London club and has helped them to the semi-finals of the Europa League as well.

Which Club Out Of Arsenal, Chelsea And Manchester United Will Sign The Player?

Sarri lost out in the League Cup final to Pep Guardiola’s Manchester City in penalty shootouts but he has proved that he can go the distance with a few more tweaks. Sarri will also be looking to reinforce his squad in the summer and Chelsea have also joined the race to sign Thomas Meunier.

Ole Gunnar Solskjaer has now identified that he needs to bring in a proper right-back to rival Ashely Young as Antonio Valencia and Matteo Darmian are at the exit door at Old Trafford. The Red Devils are also in the hunt for the Belgian full-back but will now face competition from their league counterparts.

Manchester United have a potential boost in their Thomas Meunier transfer pursuit as Paris Saint-Germain chase £55m in sales to comply with Financial Fair Play.
(Source: The Sun) pic.twitter.com/M87b5eMCBX

Thomas Meunier has seen his football time reduced drastically over the last few months and with just another year on his contract, he could depart the French champions in order to play more often elsewhere.

While speaking to news outlet L’Avenir, the 27-year-old said, “It is true. Had a rough season, but the title is still a title. I am very happy. You know, even if I only took part in four or five matches in 2019, my stats, offensive and defensive, are among the best in the PSG defence alongside (Juan) Bernat’s. Last year, although I had played less than during my first season in France, I felt I had progressed. Here, it is the same.”

PSG have already won Ligue 1. They are willing to allow Meunier to leave the French capital if an offer of over £26m is stamped.

Unai Emery Wont Be Playing The Blame Game Unlike Some Of...