The defending champions Chennaiyin FC couldn’t have asked for a tougher fixture to begin their season. With a loss to Bengaluru on the road, Chennaiyin were up against another rival seeking revenge for their ouster of last season at the hands of Chennai. Both teams sported a safe 4-2-3-1 with Coro and Jeje being lone strikers for their sides. As welcome inclusions in the starting 11, Edu Bedia made a come back after serving out his suspension. For Chennai, it was the emerging star midfield Anirud Thapa. Captain Mandar Desai would start at the back for tonight’s game. The teams played their signature games, Goa keeping the ball and making runs on the flanks, and Chennai looking to break on the counter.

Goa started off the proceedings with some crisp passing and confident formations. Thapa and Agusto, the two players Chenniyin fans cheered for would see very little of the ball in the opening minutes. Goa displayed a cool fluidity in their play and it was only a matter of time before the gates opened. The gates came off as early as the 12th minute of a throw in that made its way inside the box. Thapa missed clearing the ball which fell kindly for Edu Bedia who made no mistake putting the ball behind the net through the bottom corner. Goa were up 1-0 at the 12th minute of play.

It took Chennai quite some time to settle down not before the referee dished out a handful of Yellows to Mailson and Hugo Boumous for a headbutting tussle and to Ahmed Jahouh soon after for a bad tackle on Gregory Nelson. Chennai were starting to consolidate when Thapa got inside the box and escaped a Yellow for simulation at the stroke of the half hour mark. Chennai’s first shot on target came at the 35th minute which was cupped by the young Goan keeper. Chennai soon again broke on the counter, but the front line looked complacent in their formation and the build up finally ended in Nelson taking a shot just off target from distance. The half came to a messy close as the Goan players started going down for the frustration of the Chennai players and the referee looking on the brink of losing control. the half eventually ended with another booking going on Seriton’s name.

Goa started the second half as they had begun the first, aware and assured of their passes and formations. The second goal came out of nowhere when another Goa throw in found its way inside the box and this time, Coro did enough to get in position to bring it home. Frustration started creeping in when Raphel Agusto was yellow carded for dissent at the 56th minute. Chennai did shake it off as they started getting the ball up forward and created scoring opportunities. it was Agusto again who was in the middle of things when he skied a scoring opportunity from in-front of the goal.

John Gregory showed intent with a double switch to bring in fresh legs and more attacking options. Jeje’s second mediocre outing ended as Isaac came in, and Solam took to the pitch in place of Calderon.  Goa went on to score their 3rd goal by bouncing the ball off the heads of Coro and the big Senegalese center back, Mourtada Fall.

Chennai came close to scoring when the Goan keeper Nawaz came out to fend off a ball and gave away a free-kick just outside the box. He did make up for it by pulling of an incredible save off the free-kick. Chennai won the consolation goal deep into stoppage time when the tall Brazilian center back Eli Sabia nodded one in from a corner kick. Goa had the chance at their 4th when they broke free at the dying moments of the game, but some persistent defending work by young Jerry made the striker take a shot off target.

A disappointed Chennai will wait to host North east and table toppers Goa go back home and wait for Mumbai and Pune whom they host later in October after the international break. 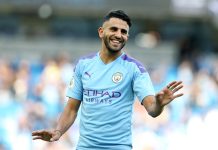 Confirmed Chelsea And Liverpool Lineups, As Blues Look To Top The...