Two second-half strikes were enough for the reigning champions, Bengaluru FC to get back to winning ways with a 0-2 win over NorthEast United at the Indira Gandhi Athletic Stadium in Guwahati. The highly anticipated fixture started at a slower tempo with both teams trying to weigh each other out in the proceedings. There were hardly any clear cut chances in the first half as both teams look to cancel out each other. Robert Jarni trusted in a lot of young players in the starting eleven and one them was Nim Dorjee Tamang who misplaced his pass in the final third allowing Sunil Chhetri to move forward as he passed it on a plate for Ashique Kuruniyan but the winger’s shot was blocked by Nim as he recovered by then.

The Highlanders had their first chance when Triadis combined with Martin Chaves as the Greek midfield twisted and turned past the Blues’ defence but an on-rushing Gurpreet Singh Sandhu thwarted his shot away. The best chance of the first half came to Udanta Singh who could have scored the opener for the visitors. Ashique Kuruniyan got passed Reagan Singh using his strength and his inch-perfect delivery found SUbhasish Roy Chowdhury flat-footed, as Udanta popped up at the far post and his diving header struck the framework and went out to his disappointment.

Harmanjot Khabra also found himself in space and delivered a great cross for Chhetri who failed to connect his header properly and it was straight to Subhasish. Both teams struggled to raise the tempo of the game as they entered goalless at the break. 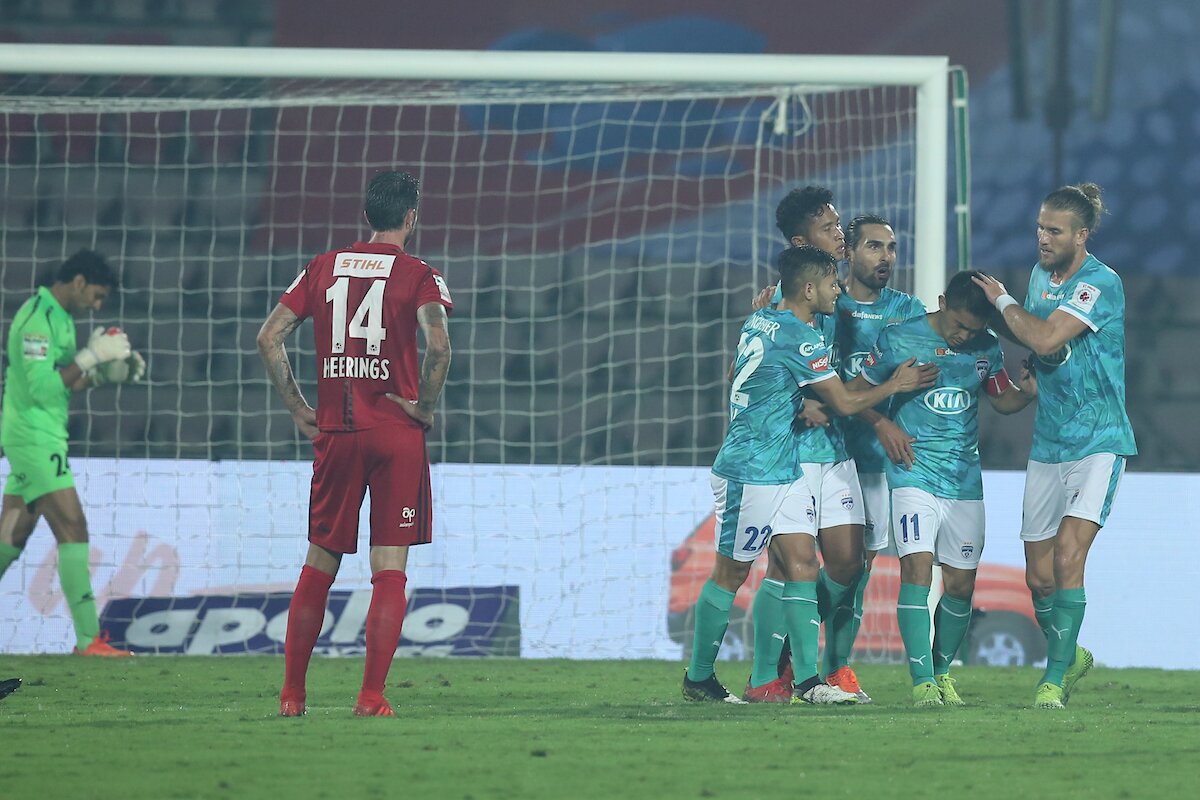 However the Indian skipper was in the mix of things again when the ball simply ricocheted of Chhetri and brushed Redeem Tlang’s arm in the box, the referee pointed towards the spot. Although it was a controversial call from Umesh Bora, Chhetri stepped up and made no mistake to hand Bengaluru FC the lead.

The stadium went up in unison when Federico Gallego returned to action for the Highlanders after getting injured last season in the playoffs against the same team. Later on, Redeem had a great opportunity when Lalengmawia released Reagan on the right and his cross into the box found the former Shillong Lajong winger in space. But as he sorted out his foot to take the shot Juanan was very swift to react and came up with a fine block.

With the hosts in search of an equaliser Carles Cuadrat’s men ventured forward and capitalized the open spaces in behind the NorthEast defence. Erik Partaalu was given a lot of time and space to deliver a great cross from the left as Spanish centre back, Albert Serran was first to react and his thumping header saw the ball rifle past Subhasish in goal who hardly had the time to move.

Serran’s goal gave them the insurance they required and sealed all three points in Bengaluru’s favour. with this win, Carles Cuadrat’s men have clinched the top spot for the time being. Whereas Robert Jarni’s men are gradually slipping away from the top four spots.