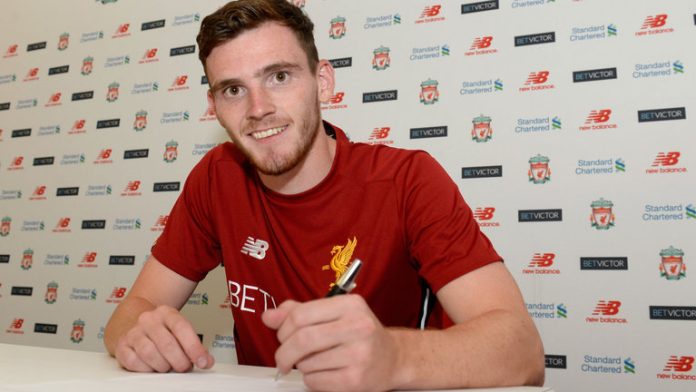 Left-back Andy Robertson has signed a new long-term deal with Liverpool at Melwood, it has been confirmed now by reports. The superstar has been one of the most consistent players for the Reds so far this season and has really impressed in recent times, with interest being ignited from various other clubs.

Due to this, the Merseyside outfit has now decided that it is best for them to give him an improved long-term contract, that will see him make more money and give them the assurance that he is going nowhere. The 24 year old Scotland international is one of the best in the league and can soon be right up there with Europe’s top left-backs, if he continues to play like he has done so far.

He joined Jurgen Klopp’s side 18 months ago from Hull City and after taking the first-team spot in the playing eleven, has now become on of the best in the league. With that being said, there is still a long way to go for him and he would like to make a major impact for his team in the long-run.

The English giants are yet to win a title under the German manager and will want to soon change that. It will be players like Robertson who can make that possible, with the club leading the points table in the league at present.

After extending his contract with the club, he told Liverpoolfc.com, “As soon as the club came to me, it was a no-brainer for me – I want to stay here, so as soon as they put an offer on the table it was signed as quickly as that.”

“It was a pretty easy contract for me and I am sure for the club as well. We both agreed very quickly, that’s why it’s been done so quickly.”

Talking about the atmosphere at the club, he stated, “Getting to know the lads and working with all the staff at Melwood has been a pleasure. The best thing about work is when you love coming in every day – and that’s what I do here. I am glad I have extended my stay and hopefully we have a lot of good days ahead.”

He has been one of the key players, who has contributed to Klopp’s success, though the former Borussia Dortmund manager is yet to win this first title at Anfield. The team reached the finals of the Champions League last term, though lost out to defending champs Real Madrid.

This year they look one of the better teams and will possibly have the opportunity to win Europe’s top cup competition once again. Robertson will be at the centre of it all and hopefully he can keep up the consistency in the days to follow. He has the potential to be a top star at the club and international level and it will now be interesting to see how he develops under the current Kop boss.

He further talked about his ambitions with the club and how he wishes to win the Champions League title with Liverpool in the days to come. An understandable dream of every player that his team should be the best in Europe and the club have already played in three cup-finals under Klopp and have lost. Something, that needs to change and fast.

The Scot was also named the skipper of his national team in September last year and the way that he is playing at present, things can only get better for him. He is under the guidance and know-how of Klopp, who is a really good manager and hopefully the combination can bring success to Liverpool FC in the years to come.

All You Know Ahead Of The Clash Between Chelsea And Hull...