Matthijs de Ligt is one of the most sought after players in the upcoming transfer window, as top clubs across Europe look to sign this star. The 19 year old Dutch centre-back is leading Ajax Amsterdam from the front as the Dutch giants have got past Juventus and Real Madrid and now face Tottenham Hotspur in the Champions League semi-finals this week.

The captain of the Ajax squad has been linked to several big names across Europe including the likes of Bayern Munich, Barcelona, Manchester City and Juventus keeping close tabs on the player. It is most likely that he will be ending up at Barcelona with his team-mate Frenkie de Jong. 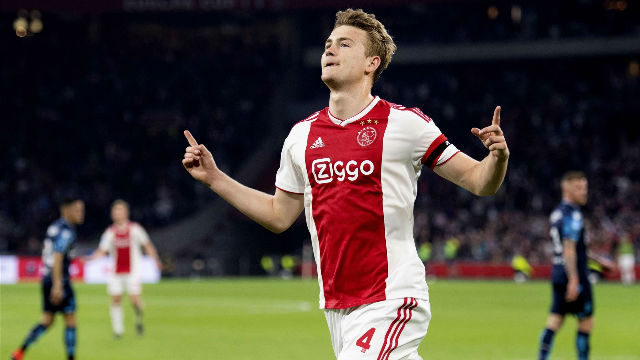 However, former Manchester United star Dimitar Berbatov insists that Manchester United must try and sign Matthijs de Ligt and rightly so as The Red Devils have had a poor season in defence and upgrades to the likes of Chris Smalling and Phil Jones are long overdue at Old Trafford. The youngster is keeping on winning hearts and accolades on the field and his astute leadership at such a young age is very much visible when he’s playing which is a huge boost for the Ajax squad.

“Ole needs a centre-back who can control the ball, pass into midfield and not be intimidated – just like Van Dijk,” said the former Bulgarian international, as quoted by The Sun.

“If I am a striker with Van Dijk in my team, I know it will be OK. They need someone like that.

“For a player so young, De Ligt’s performances are incredible. He is mature, comfortable on the ball, and he is not bothered who he plays against – Ronaldo or whoever. He doesn’t care, he just plays down his own game.

“He moves with grace and does not panic on the ball. He has everything you want from a defender.

“The guy will be an unbelievable player. He is a great talent and I hope United go for him in the summer and get him.”

It will be tough negotiating with Mino Raiola whose French client at Old Trafford Paul Pogba is reportedly unhappy and could be seeking out a transfer to Real Madrid next summer. According to de Ligt, agent Raiola will have the final say in the transfer of the Dutch starlet and the Dutch super agent will try and seek out a good amount of revenue from the transfer of de Ligt.

There’s a possibility that de Ligt might be offered to United in order to facilitate the transfer of Pogba to Real Madrid as a sweetener as United will get hold of a world class talent which might solve a lot of their problems in the defense for the seasons to come. Howerver, as of now, as per media reports, Barcelona are indeed the front-runners and their President has confirmed interest in the player and it is very likely that the Catalan giants will break through an agreement with Marc Overmaars soon enough to facilitate the transfer of de Ligt to Camp Nou.