Chelsea made their first signing under Frank Lampard this season after the transfer ban has been lifted from Chelsea. The 27-year-old Moroccan international is set to join the Blues next season after the two clubs reach an agreement for the winger. Chelsea got Hakim Ziyech for only £33m and that can be a huge bargain in the current situation of the transfer market.

Ziyech has been one of the best players for the Dutch side in the last couple of seasons and his next challenge will be to succeed at the very highest level of the game. His former coaches from his previous clubs insist that Ziyech has every chance to shine in England and the physicality of the league won’t be a problem for him.

Pahlpatz, Ziyech’s former coach at Twente, told Sky Sports: “He has played in the Eredivisie for seven or eight years now and knows all about Holland. The step to the Premier League will do him good. He will be playing with the best players every day and that is a new challenge for him. I think he will do well there.

“He will have to get used to the number of games and the physical side but in the end, he will succeed, for sure.”

The Comments By Hans De Jong

Ziyech scored 21 goals for Ajax in all competitions in the 2018-19 season which has been the breakthrough year in his promising career. This season, before the suspensions of the league due to coronavirus outbreak, Ziyech netted eight times and created a remarkable 21 assists for the Dutch side.

De Jong rubbished all concerns about Hakim Ziyech’s physicality. The man who coached the midfielder in the Heerenveen U-17’s suggests Ziyech is physically good enough to cope with the fast pace of English football. He added, “They are still saying that he has a problem with his physicality. That is what everybody is saying right now but they were saying the same when he came from the academy at Heerenveen. They said the same when he went to Twente – a problem with his physicality. Same thing at Ajax. So I do not think it is a problem. I have absolutely no doubts. He is going to beat the next challenge.” 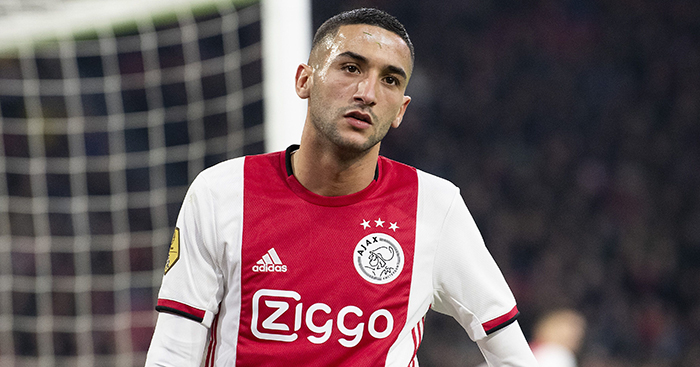 What Next For Ziyech?

Chelsea has struggled for creativity and threat in the attacking third on the pitch this season. Injuries have been a concern with Cristian Pulisic, Callum Hudson-odor, Pedro, N’golo Kante, Antonio Rudiger, Tammy Abraham all have been sidelined for the most of the part with Ruben Loftus Cheek has not yet featured under Frank Lampard this season.

Veterans like Pedro and Willian are expected to depart the Blues this summer. Their contracts will be expiring soon. Ziyech will be a good option for Lampard on the wings. He could be an asset for Chelsea next season if the boss uses him properly.

He has every chance to be a star at Stamford Bridge with his charismatic approach. The player is quite exciting to watch for the fans. This is exactly one of the reasons why Chelsea fans are so excited to see the Moroccan play for them next season.