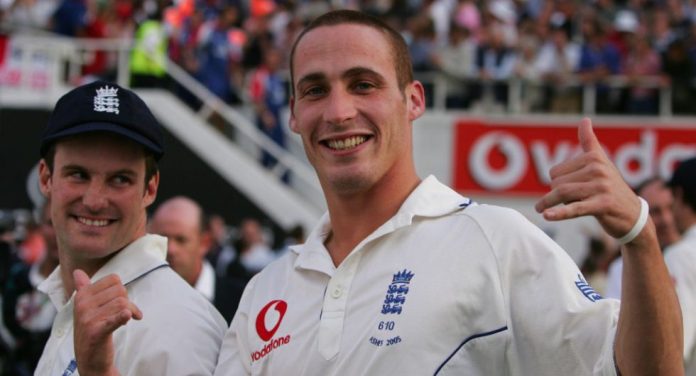 The fast bowler of England, Simon Jones has bowled a brilliant delivery against Australia a few years back. Michael Clarke has not been able to judge the proper line of the ball. The ball has pitched well outside off and the batsman has thought that it will certainly miss the off stump. However, the thing has not gone in that way. The ball has come into the stumps. It has been a brilliant piece of bowling and the in-swinging delivery has gone to history directly.

The Video By Wisden Cricket Of Simon Jones That Went Viral

Jones has made his test debut against India in 2002. However, his test career has not lasted long as he has played his last test match in 2005 against Australia. Simon Jones has performed quite well for his county side Glamorgan till 2007. After that, he has moved to Worcestershire to play 2008-09 season. After playing for Hampshire he has again been loaned out to Glamorgan.

Simon Jones’ test career has been quite good. He has taken 59 wickets in 18 test matches with three five-wicket hauls. Simon Jones’ best figure has come in the third test of the 2005 Ashes series. The reverse swinging delivery which has knocked off the stumps of Michael Clarke is remarkable. In that innings, Simon Jones has taken the wickets of Ricky Ponting, Adam Gilchrist, Shane Warne, Brett Lee and Jason Gillespie. Simon Jones has bowled quite well throughout the whole series.

Happy birthday to Simon Jones, the man who bowled one of the greatest deliveries of the 21st century. pic.twitter.com/iGjKFQCkls

The Career That Could Have Been World-Class

However, Simon Jones’ career has not been quite long because of an injury. He has undergone surgery and after surgery, he has not been 100 percent fit anymore. The injury has occurred just before the tour to India in 2006. After that, Simon Jones has never played for England. However, he has continued to play domestic cricket.

England has not been able to win the third Test match of Ashes 2005 at Old Trafford despite being in the driver seat of the match for most of the time. In the first innings, they have scored 444 runs. Michael Vaughan has scored 166 runs in that innings. Shane Warne has been the best bowler of the innings. He has taken four crucial wickets. Australia has been able to post a total of 302 runs.

The Match Was An Amazing Memory In Itself

Shane Warne has played a brilliant inning of 90 runs in this match. This knock has been crucial in terms of determining the result of the match. Jones has been the best bowler of England with six wickets. In the second innings, Andrew Strauss has scored a century. Glenn McGrath has been the pick of the bowler for Australia with five wickets under his belts. Australia has survived in the fourth innings of the match and they have been able to stay away from the defeat. Ricky Ponting has played a brilliant inning of 156 runs to lead the side from the front.

Jones has been the second-best bowler of England after Flintoff in the series. He has taken 18 wickets in five test matches. England has won the Ashes with winning the fourth test match of the series. Jones has made a big impact in this Ashes win for England.