Manchester United End The Season On A High- The Red Devils finished off their Premier League campaign with a brilliant away win against Wolverhampton Wonderers. Ole Gunner Solskjaer’s side won 2-1 courtesy of goals from youngster Anthony Elanga and veteran Juan Mata. Champions League football was secured already as it was confirmed before the matchday began that they will finish second.

Ole gave Hannibal and Will Fish their United debuts as well. Anthony Elanga scored a bullet header that put the team from Manchester ahead. The kid made an impact in the Black Country that may not be forgotten for quite some time for sure.

What Manchester United Boss Solskjaer Told MUTV After The Win On The Final Day Of The League Campaign?

Nelson Semedo then sent the home fans wild with an equaliser, six minutes prior to half-time, before Juan Mata scored a penalty in first-half stoppage time to regain the lead. Ole was very happy with their performance in the afternoon.

“It was about time we did! We have not done it before. So what an achievement this has been by all the players. They have been really excellent and the credit goes to them. I knew that we did put this record on the line by making all the changes, but we had to. One because we believed in these players, and two because the other players have played so much this season and needed an energy boost for Wednesday.” 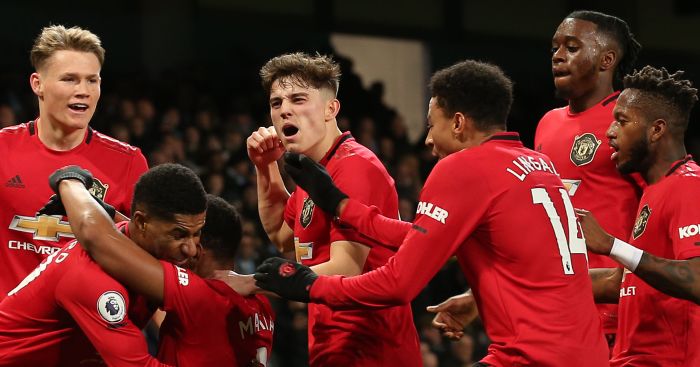 “We played this in the spirit of Man United and Sir Alex (Ferguson) and Sir Matt (Busby), definitely You have to take risks, but we believed in them.”

Manchester United made an incredible record in the Premier League after their 2-1 victory against Wolves. United finished the league season unbeaten away from home. This record is only held by Preston North End in 1888/89 season and Arsenal in 2001/02 and 2003/04 season in the English top flight. Ole side won 12 and drew 7 on the road this season in Premier League.

OLE’S Rotation Policy That Was Visible In This Game; Ahead Of The Europa League Final

With the Europa League final coming this midweek on Wednesday, Ole Gunner Solskjaer decided to make as many as ten changes to his squad for the away trip at Wolves. Only Eric Bailly remained in his place from the previous game. Two former Chelsea players featured in the match too. Nemanja Matic led the side to victory, Juan Mata scored on his return to the lineup. ELANGA’s Debut Goal For Manchester United In This Match

Manchester United academy graduate scored his first United goal with a bullet header to silence the Molineux crowd. Anthony paid back the trust his manage showed in him in the last few games as he became United’s 19th teenager to score in the Premier League, a record only behind Arsenal who have 20. The youngster became the fifth Swede to score for the club after Jesper Blomquist, Henrik Larsson, Zlatan Ibrahimovic and Victor Lindelof.

This must have been some achievement for him. The future looks really bright for this young star. He is just 19 at present and can do a lot of things at Old Trafford. That is if the manager utilizes him properly in the seasons to come. The competition at Manchester United is always going to be tough. However, Elanga looks really ready to go and has already left his mark on this team.

Liverpool Set To Give This Star A Contract Extension, Is This...