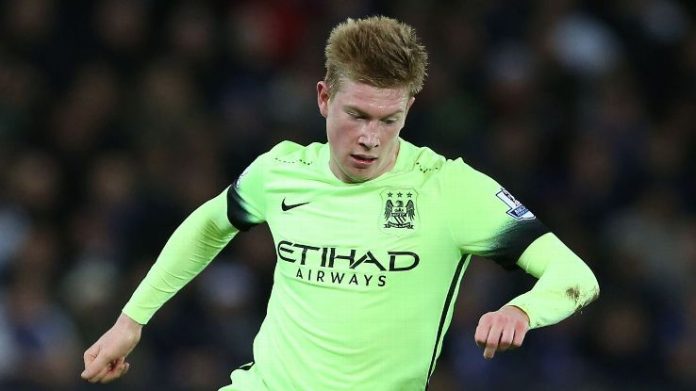 Belgian superstar Kevin de Bruyne is apparently missing out on the crucial Manchester Derby in the Premier League this Wednesday night according to coach Pep Guardiola in a latest update about the midfielder. The Belgian was forced to be subbed in the 38th minute against Tottenham Hotspur this weekend and was replaced by Fernandinho. Manchester City won the match 1-0 thanks to a brilliant finish from youth academy product Phil Foden in the 5th minute.

Till the tests were conducted, there were concerns that the Belgian might have picked another knee ligament damage which has already kept him on the sidelines twice this season in lengthy spells but it was found out to be a muscular injury.

When asked about the extent of the injury post match, the Spaniard replied, “I did not speak with him I think muscular injury, I do not know how big an impact but I think the next games he will be out.”

“I did not speak to him, but he put his hands on his hamstring. Tomorrow maybe we will know.”

“Maybe,” Guardiola replied. “Maybe Kevin (De Bruyne) will not be there, we will see. I didn’t spend one second thinking about Old Trafford.

“I need to enjoy today and rest a bit, tomorrow afternoon watch as much of the (United) game as possible then we play our Premier League game against our neighbours and it’s good we will try.”

The non-availabilty of Kevin de Bruyne could prove out to be a costly affair for Manchester City as they are going neck to neck with Liverpool for their second Premier League title on the row. Manchester City are currently second on the points table, 2 points behind Liverpool who are at 88 points with a game in hand for the citizens.

The Manchester derby will be a key fixture in the road to decide the next champions in England as there’ll only be 3 fixtures after that and it’s a must win in all the fixtures for both Liverpool and Manchester City.

Manchester United are in a shaky phase themselves as they crashed out of the UEFA Champions League to Barcelona and have lost 3 of the last 5 matches in the Premier League, the most recent one being an embarrassing uninspired 4-0 to Everton at Goodison Park this weekend which has kind of put questions on new manager Ole Gunnar Solksjaer’s tactical depth.

Pep Guardiola’s Manchester City on the other hand are in fine form domestically having won all of the last 5 matches and will travel to Old Trafford to make a statement as they keep their hunt for the next Premier League trophy alive. They will look to capitalise on Manchester United’s poor recent form and will try to edge out on their arch rivals both tactically and also in the mental battle. City are pretty much looking to add on to their EFL Cup trophy to their cabinet this summer.

It was eventually confirmed that the midfield superstar will not be fit for the game in mid-week and Pep will have to look at alternatives to fill his void. It will be interesting to see how the former Barcelona and Bayern Munich manager lines up his squad for this key fixture, with the Premier League title race still very much alive.

Breaking: Bundesliga Star Could Be On His Way To Anfield