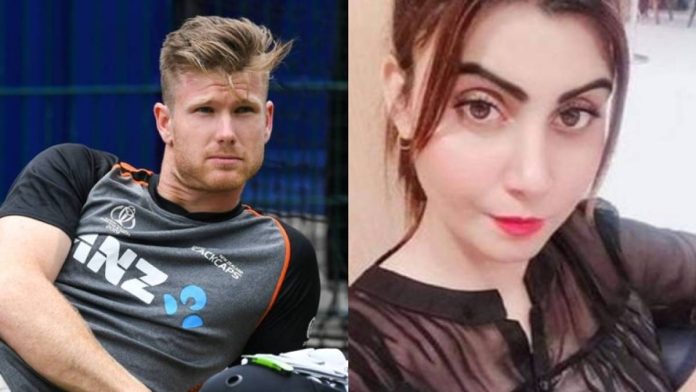 Jimmy Neesham broke down when New Zealand lost the World Cup final against England in 2019. The match went to the super over. Moreover, Neesham even scored 14 runs out of the 16 needed to win the super over. The super over ended in a tie. England won the finals on account of scoring the most number of boundaries and they became the World Champion for the first time.

Neesham has an incredible sense of humour. He is also very active on social media and good at giving witty replies. Moreover, he does not shy away from trolling on social media. Recently, Pakistani TV actress proposed Jimmy Neesham flirtily through her Twitter profile. She currently works in Pashto channel Avt Khyber. Shinwari asked Neesham to be the father of her future kids, with some emojis. She tweeted, “Jimmy would you like to be the daddy of my future kids.”

Jimmy would you like to be daddy of my future kids ??

Neesham responded in a kind and flirtatious manner. “I really feel like the emojis were unnecessary,” Jimmy Neesham replied back and stated in response, which got the fans buzzing.

Neesham replied her in the same manner she asked. This shows that the Neesham is very good at giving replies on social media. The reply also highlights Neesham’s sense of humour. It was a fun conversation to watch and the fans would have totally loved it.

It wasn’t really the first time that the cricketer was asked out on social media. Many instances see cricketers get such love from friends and fans online. It has been the case forever.

I really feel like the emojis were unnecessary https://t.co/tH3g0jCWe4

Another Fan Tale With Neesham

A fan recently asked Jimmy Neesham about his favourite Indian cricketer. He wittily even replied that it was his team-mate, Ish Sodhi. The wrist-spinner plays in the New Zealand team but was born in Ludhiana, Punjab. Moreover, his full name is Inderbir Singh Sodhi.

Neesham shares a very healthy rapport with the Indian fans given that he had appealed them to resell the World Cup final tickets on official websites after New Zealand had defeated India in semi-finals, leaving the Men in Blue fans in distraught.

Jimmy Neesham first came into limelight as a promising all-rounder in the U-19 World Cup of 2010. Within two years of making his first-class debut, Neesham was called into New Zealand’s T20I squad for the series against South Africa in 2012-2013. He eventually made his T20I debut at Durban, followed by his ODI debut at Paarl.

No Games During The Lockdown

There are no matches going around at present. The global pandemic has taken over and the fans are waiting for things to resume. Hopefully, things can get back to normal. The game of cricket and other sports are being missed at present.

The entire human race is suffering. Such short tales of wit and wisdom keeps us going. A special thanks to Jimmy Neesham for this cute and funny moment online. Hopefully, more such tales follow, which can put a smile on the faces of all cricketing fans. Cheers to Neesham!! Cheers to Life!!