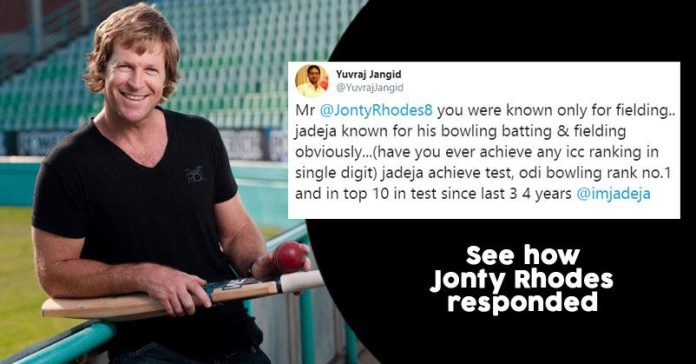 Indian cricket fans love Jonty Rhodes a lot. He is one of the most popular overseas players in India. Moreover, Rhodes is undoubtedly the best fielder the game has ever seen. Indian cricket fans idolise Jhonty Rhodes here. He also has a good fan following on social media. Rhodes also does not miss any opportunity to interact and behave friendly with his fans.

However, on one instance a fan tried to disrespect Jonty Rhodes. Rhodes did not miss any opportunity to give his reply. He gave him a classy reply. The incident started in this way: Ravindra Jadeja played a very good knock against West Indies in the Antigua Test. Jadeja himself is also a very good fielder like Jonty Rhodes. So, Jadeja’s batting performance pleased Jonty Rhodes. So, the ex-Proteas star praised the allrounder on Twitter for his good innings with the bat.

However, one fan misunderstood the meaning of his Tweet. He thought that Rhodes was undermining Jadeja’s batting and bowling performance. So, he replied to Rhodes’ tweet and started to insult him. The fan told Rhodes that people knew him only for his fielding. He was not good with the bat and ball. Also, he did not achieve any ICC Ranking under 10, ever in his career. He also reminded him that Jadeja has achieved no. 1 bowling rank in ODI and Tests. He is also in Top 10 for the last 3-4 years.

A fan tried to insult Rhodes “Mr @JontyRhodes8 you were known only for fielding. Jadeja is known for his bowling batting & fielding obviously…(have you ever achieve any ICC ranking in single-digit) Jadeja achieve test, ODI bowling rank no.1 and in top 10 in test since last 3-4 years @imjadeja#INDvsWI ” the fan tweeted.

Mr @JontyRhodes8 you were known only for fielding.. jadeja known for his bowling batting & fielding obviously…(have you ever achieve any icc ranking in single digit) jadeja achieve test, odi bowling rank no.1 and in top 10 in test since last 3 4 years @imjadeja #INDvsWI

Jonty Rhodes did not miss to reply to his tweet. He did not mind what the fan wrote and replied in a classy manner. Jonty cleared out that he was just trying to be funny and asked the fan to take it easy. He even called Ravindra Jadeja a great all-rounder

Rhodes gave a classy reply to him

Jadeja notched up a very good 50 in that innings. His half-century along with Ajinkya Rahane’s half-century helped India to recover after a poor start with the bat. India posted a total of 297 runs on the board. It sent new hope through the veins of every Indian fan that day. Even the team felt completely rejuvenated.

Recently, Rhodes even applied for the post of fielding coach in the Indian Team. However, he did not get that job. The BCCI decided to retain R Sridhar for that post for now. Maybe, he will be into the picture in the near future. Cricket in India is more than a game. It’s a religion and the fans love everything about it.