Chelsea will play against Leicester City in the quarter final of FA Cup in a very crucial game of the season. It is surely a match to watch out for every football fans. Antonio Conte have to motivate his players before the match. The defeat against Barcelona had seen them out of the contention of UEFA Champions League. Now, they have to perform well in the FA Cup to win at least one trophy this season after winning the Premier League previous season.

The Brazilian winger Willian is in red hot form in this season for the Blues. He is going to be one of most important players among both the teams. His pace in the counter attacks can be the key to success for the Blues. His ability to take shots from long distance is one of the attributes of his game-play.

Willian had scored one brilliant Goal in the first leg of the match between Chelsea and Barcelona and two of his shots had struck the bar. So, he will certainly be the player to watch out for the Blues in this match.

Eden Hazard is considered as one of the best dribblers in the World football right now. His play making ability is making him superior to the other players in the field. If he can show his real class, Chelsea still have a chance to win in this match against Leicester City. If Eden Hazard is again chosen to play as a role of false nine, he still has to give his level best for the sake of the team.

Andreas Christensen will be available for the Blues after missing the previous match. David Luiz is unavailable due to knee injury.  Thibaut Courtois will yet again surely start in goal while Christensen, Azpilicueta and Rudiger might start for Chelsea in a three man central defense, while Moses and Alonso will be there at two flanks.  Fabregas and Kante will always be present in the heart of the midfield for Chelsea. Willian, Giroud and Hazard will be there upfront for the Blues against, which will be a boost for Antonio Conte and his plans of beating Leicester City. 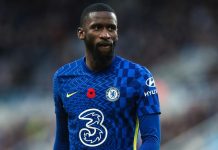