“It is Arsenal, you know. Come on, it is Arsenal!” These were the first words from the 18-year-old Gunners’ academy graduate who has finally signed a new long-term contract at the North London club. After months of negotiations, the English attacking winger will be part of Mikel Arteta’s side for the next few years. Saka had only 18 months remaining in his Arsenal contract and he was in doubt to sign a new deal.

Manchester United, Liverpool and Bayern Munich were keeping their eyes on the youngster’s situation at the club. Those speculations have finally ended as of now. After signing the contract Saka could not hold his excitement about his boyhood club.

What Saka said after signing the extension?

“I felt that it was right in my heart to extend my contract here and I feel like this is going to be best for my development.” 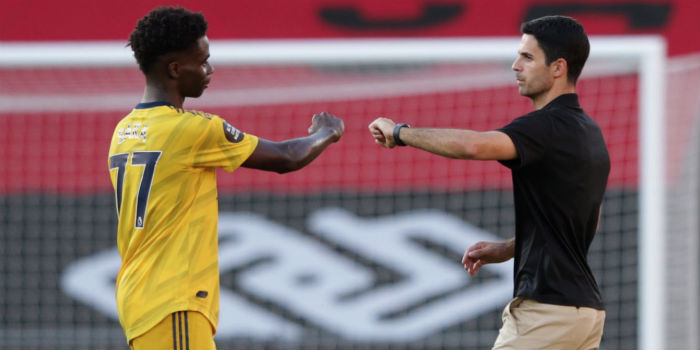 Mikel Arteta is delighted to have Saka in his long term project at Arsenal. Saka, a naturally attacking player who generally plays at the left-wing position, has also played at left-back in few games under Arteta. The Gunner’s boss is happy about his involvement and growth as a player.

“Bukayo is a talented and intelligent young player. He has impressed me with his work ethic and attitude to learn and adapt, and it has paid off in his performances. I am excited to continue working with him to develop him further, and for him to help us achieve our goals.”

Saka became the first teenager to hit double figures in assists in a single season for Arsenal since Cesc Fabregas did that in the season 2006/07, after assisting 11 times in 33 games across all competitions this term. “This is something everyone involved wanted to happen and we are delighted that Bukayo has signed a new long-term contract.”

“He is making great progress and is one of a number of young players who have developed through our academy. This is so important for us as we move forward as a club.”

This will be a morale boost for the Arsenal squad for sure to see the talented England Youth International committed his future to the club in a crisis situation. Arsenal is currently sitting in the eighth position in the Premier League table. They are nine points behind Leicester City who are sitting at the fourth.

It is almost an impossible task for Arteta to make this side qualify for next season’s Champions League with only four games left. However, they will surely try their best to make it happen.