Liverpool’s defensive ace Alisson Becker has revealed that the Reds will try and win every competition they will play in the next term.  The Brazilian goalkeeper has been in top form since his move to Anfield last summer as he ended the last term with a staggering 27 clean sheets in 51 appearances for the Reds. He has been an influential figure in the Liverpool lineup, having replaced flops like Simon Mignolet and Loris Karius.

The 26 year old made a bold statement in his very first season in the Premier League by winning the Golden Gloves award and finishing the season as the runners up to defending champions Manchester City. However, his biggest achievement would certainly be the role he played to lead his side to the final of the Champions League and eventually help them to win the coveted trophy for the sixth time in the Merseyside club’s history. 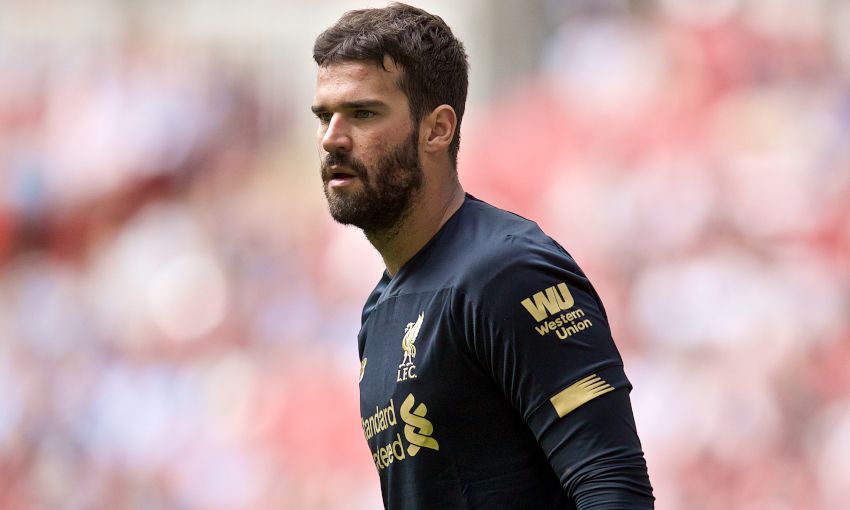 The Brazilian returned to training for the Reds after his holidays post the triumph in Copa America. Speaking to the club’s official website, the 26 year old said that he was very happy to return to Liverpool after a successful spell with the national side. He said, “I am very happy to be back. I had nice holidays with the family, spending time with my family and friends, but I was missing the pitch, the lads, the staff, everyone – missing you guys, also!”

He added, “Now I am looking forward to coming back to play and starting to work again. [As a team] we are excited, but we have to keep our feet on the ground, just as we did last season. We want to try for everything this season, so we need to work. The level of the football is high and similar at every club, so we need to work hard to achieve the same things and achieve even more this season.”

Alisson also won the Golden Gloves award for his brilliant performances in the Champions League as well as Copa America, proving his worth as arguably the best goal-keeper in the current scenario. His composure as well as skills have been outstanding in between the goalposts and it is definitely going to be a big boost for Jurgen Klopp ahead of the next term. The Reds did not have a good pre-season, losing all of their matches.

However, things are expected to change when the Reds start their season a couple of weeks later from now. Before that, they are set to face the defending Premier League as well as FA Cup champions, Manchester City in the Community Shield, on the 9th of August. Both the heavyweights would look to get the better of each other when they lock horns at the Wembley stadium and start the season on a winning note.

Alisson is expected to be at his best once again in the current season (though he is out with an injury at present) and help his side to dethrone their rivals Manchester City. They will want to lift the Premier League trophy this time around.

The Reason Why Liverpool Should Try To Sign This Top Serie...