According to the latest reports Premier League giants, Manchester United are closing in on a deal to sign Lazio star Sergej Milinkovic-Savic in this summer transfer window. Chiefs from Lazio have reportedly flown to Old Trafford to negotiate a deal for Savic, who is to be valued at around £89m.

Manchester United endured quite a torrid season this time as they finished in sixth place on the Premier League table and unable to show any true signs of the club’s DNA which focus on attacking the football. At the start of the season, Jose Mourinho was in charge of the club but the Portuguese boss instilled a very defensive philosophy into the club and the United faithful did not take kindly to his tactics and style of play. 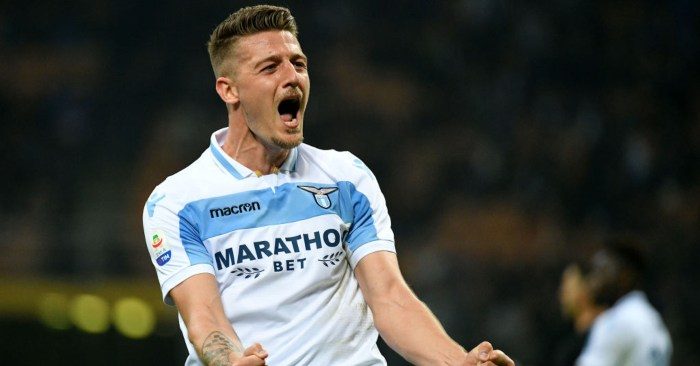 The writing was on the wall for the 56-year-old as he was not able to deliver the results and performances that were desired by the fans and the board. Mourinho was then given the sack back in December and United turned to a familiar face in the form of Ole Gunnar Solskjaer to handle the reigns at least until the end of the season.

The 46-year-old impressed heavily during the early part of the season exceeding the expectations by taking United into the quarter-finals of the Champions League by beating Paris Saint-Germain in dramatic fashion. United overturned a 2-0 deficit and won 3-1 at the Parc des Princes to progress through to the next round of the Champions League and they also strung together a bunch of positive results in the Premier League to help United closer to a top-four position. These impressive performances handed Solskjaer a three-year contract on the table but after he signed his fate as permanent manager of the club the results weren’t as desired.

United was dumped out of the Champions League and suffered a few horrific defeats in the Premier League which indicated that Solskjaer has a massive task on his hands to bolster his team for the future if they want to win trophies on a regular basis. The red-half of Manchester offloaded Marouane Fellaini in the January transfer window and also allowed Ander Herrera to leave the club for Paris Saint-Germain in the summer.

Solskjaer now wants to improve his midfield department and add some strength to it this summer are United are now targeting Lazio superstar midfielder Sergej Milinkovic Savic. The 24-year-old did not have a great season with the Italian outfit as his form dipped but he still managed to score five goals and provide 3 assists as well in the Serie A across 31 appearances.

Lazio’s chiefs have reportedly flown to England quite recently, in order to negotiate a deal with Manchester United over Sergej Milinkovic-Savic in an £89m deal. However, because of the dip in form that Savic suffered in the last term, the Premier League giants are keen on getting a deal of at least £71m for the Serbian midfielder.

This is one interesting transfer saga, though when the Manchester based side want to player, they more often than not generally get him.