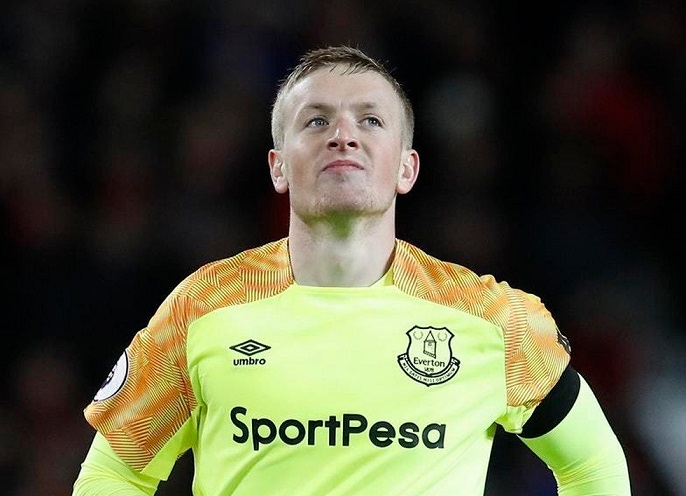 Manchester United have assured the supporters that they will not think twice to break the bank for Everton custodian, Jordan Pickford if they eventually lose David De Gea. The Spanish numero uno is discussing on a new contract with the club but his demands area around £350,000-a-week to sign a long-term contract at Old Trafford and reject a potential move to French giants Paris Saint Germain.

The Spanish international have been impressive for the Red Devils even in their rough days and wants a deal worth more than their highest paid footballer currently, Alexis Sanchez.

There is definitely chances that the Spanish custodian may opt otherwise and move away from Old Trafford for various reasons and hence the Red Devils are already plotting a move to make England no.1 Jordan Pickford become his successor at Old Trafford.

Everton, on the other hand, will look to out out for their best goalkeeper and will ask for a hefty fee and at least double of the £30m price tag which the Toffees bought from Sunderland in 2017.

Although the Merseyside club has already fended off interest from Chelsea in previous transfer windows and are desperate not to lose another star player after they realised the mistake they did by leaving John Stones to Manchester City.

Jose Mourinho has also considered Atletico Madrid’s Slovenian goalkeeper Jan Oblak but his £87m buy-out clause can be a bit too much for the Red Devils to invest on making Pickford the preferred option.

De Gea joined Manchester United back in 2011 for a £18.9m from the Rojiblancos. The Spanish custodian has been lauded by several former players, pundits, and coaches, one of them being Alex Ferguson, who described the shot-stopped “an outstanding replacement for Van der Sar”

De Gea has proved his mettle after winning the Premier League title under Ferguson back in 2013. Since the legend’s departure, the Spanish custodian has become their most valued possession bailing out the hapless defence for innumerable times, mostly across the tenure of David Moyes, Louis van Gaal, and Jose Mourinho.

The performances for the Red Devils have reflected in the interest from various clubs from Europe including Real Madrid who almost signed the Spanish international It is his performances that allowed him to win the Manchester United player of the year in four of the last five years.

Pickford,24, recently made the headline for all the wrong reasons after he misjudged a bouncing ball and could not parry it over the bar, rather touched it in play again allowing Liverpool forward Divok Origi to score an easy goal. The Belgian bagged all three points for Liverpool late in the injury time winning them the Merseyside derby.

However, judging the English international by only one incident is not fair as he is comparatively very young and his performances for the Three Lions in the World Cup in Russia was highly applauded as England went on to reach the semi-finals.

Things at the Old Trafford hasn’t been great as the Red Devils are languishing in the eighth position on the league table. De Gea, 28 is at his prime currently and staying at United isn’t helping him win trophies which could have happened if he moved elsewhere and hence the thought will be at the back of his mind. Plus Jose Mourinho has not shared a great relationship with his players recently and the Spanish international was reportedly also concerned about the future of the club with the Portuguese tactician, before signing a long-term contract with the Red Devils.