According to the latest reports, Premier League giants Manchester United would be keen on signing Declan Rice and Jadon Sancho over Callum Hudson-Odoi and Gareth Bale in the upcoming summer transfer window. The Red Devils are planning a summer overhaul and have targeted and prioritized the players that they want to sign in the summer. This means that they may go in for these new primary targets rather than going in for the Chelsea and Real Madrid star.

Manchester United was in dire straits at the start of the season when Jose Mourinho was in charge of the club. The Portuguese manager instilled a very defensive philosophy into the club and the United faithful were not too happy with those tactics. The football lacked conviction and desire and without any results to back up those poor performances, the writing was on the wall for the 56-year-old Mourinho. A 3-1 humiliation at the hands of fierce rivals Liverpool back in December was the final nail in the coffin for Mourinho’s managerial career and he was fired just a few days later. 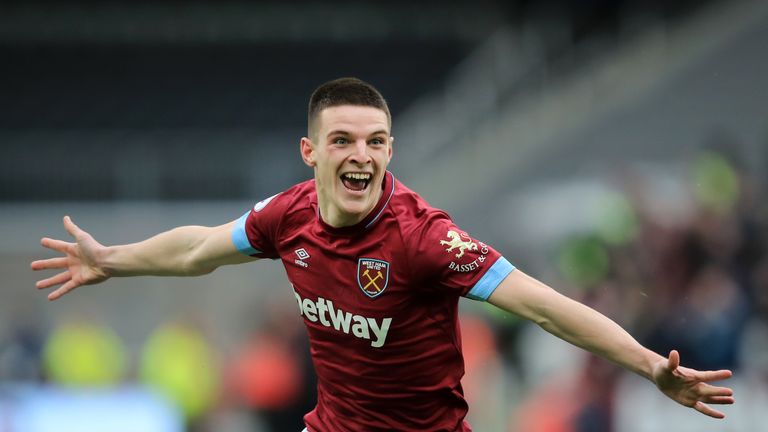 The Red Devils then turned to a familiar face in the form of Ole Gunnar Solakjaer to stabilize the ship and guide the club through their horror patch. However, since taking over, Solskjaer has exceeded expectations at Old Trafford. In his first 19 games as manager, the Norwegian managed to win 14 of them and he also guided Manchester United into the quarter-finals of the Champions League.

A 2-0 deficit against Ligue 1 giants Paris Saint Germain was turned around in dramatic fashion with a 3-1 win at the Parc des Princes and a string of positive results in the Premier League meant that Solskjaer immediately got the job on a permanent basis. The 46-year-old is now aware that he needs to bolster his squad for the next season and he needs reinforcements if he is going to win or compete for silverware with his team.

There are quite a few targets that United have lined up for the summer as Solskjaer wants to add some more high-quality attackers to his squad. United have been linked with quite a few top players in Europe this season including Gareth Bale, Jadon Sancho, Callum Hudson Odoi and Declan Rice. However, out of those four, United are now narrowing their prime targets to just two players.

The latest reports claim that Manchester United would prefer Sancho and Rice over Bale and Hudson Odoi this summer. Bale has become unpopular with the fans at the Santiago Bernabeu and wants a mammoth £450,000 a week deal if he returns to the Premier League. The 29-year-old may not be wanted at Manchester United if he leaves Real Madrid. The red half of Manchester is also targeting Callum Hudson Odoi but will likely choose Bundesliga superstar Jadon Sancho over the Chelsea winger.

However, United will face stiff competition for the signature of Sancho from Bayern Munich and Barcelona for the 18-year-old. United are also reportedly targeting West Ham United’s defensive midfielder Declan Rice in the summer as a potential replacement for the PSG bound Ander Herrera.