Manchester City boss, Pep Guardiola insists that his former club FC Barcelona are way ahead of the Premier League side. The Spanish tactician feels that Manchester City are taking gradual steps in building a legacy of their own but are behind the top clubs in Europe. The Citizens though have made astronomical progress after being taken over the by the Abu-Dhabi based group and under the tutelage of Pep Guardiola, the club has reached a notch higher.

The Citizens are on course to defend their title as they are currently top of the league table with nine matches remaining. Manchester City are also looking ahead in other competitions as well and the fans are hopeful that the Pep Guardiola’s neb can make this season memorial. They are definitely considered as one of the top sides in Europe currently and are also tipped as one of the contenders to lift the Champions League title. 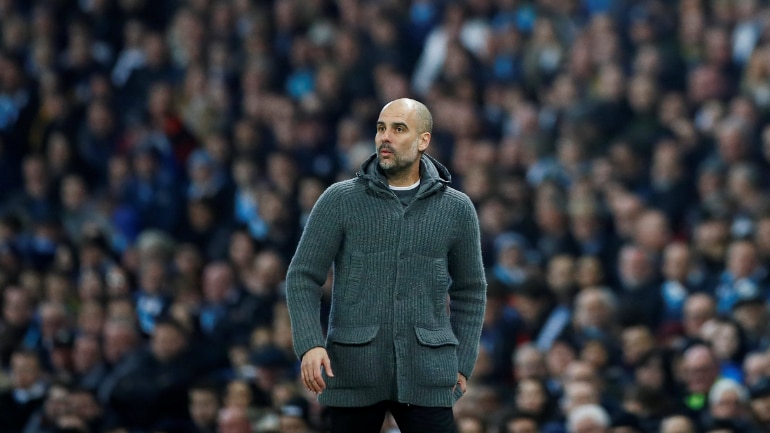 Guardiola stated, “I think the last decade one of the teams who grows the most and makes a step from here to here is Manchester City. Not just with our period, the people who were here in the last three seasons together, but the last decade.”

“I think to compare to Barcelona, we are far away. Far away in terms of history, in terms of legacy and many, many things. We are far because we are one decade (under this ownership) but we will do it through getting better.”

“We are taking small steps… every time it is getting better and that is the point.”

The Citizens first won the Premier League title back in 2011-12 under Roberto Mancini’s guidance and the second title followed two seasons later with Manuel Pellegrini at the helm.

However, the dominance was redefined under Pep Guardiola as City achieved the glorious 100 points mark in the Premier League and added the third feather in the cap for the Citizen. The sustained dominance that has been built under his time at the Etihad was not done earlier hence this Manchester City side is set to rule in the Premier League for years to come.

With a lot of work done, there is a lot more work left for the club with European glory still a dream and turning it into reality is Guardiola’s next target. Here the Spaniard rightfully keeps Barcelona much ahead as the Catalans have five Champions League trophies to go alongside their 25 La Liga titles. The Spaniard further added, “We had 100 points and fighting for all the titles and after that, the next year [to] still be in there, that is I think the best steps we can achieve.”

However, he added that comparing with the likes of Barcelona, Real Madrid or Bayern Munich was completely useless, as City does not have the history yet and there is still a long way to go. He concluded by saying, “I think the best way to help this club, is feeling we are still far, far away from these clubs. When I was at Barcelona and Bayern Munich we never thought we are going to work to leave an incredible legacy for the future. These kind of things happen. If we will be remembered, we will see. But from my point of view, I have to win more and more through the years.”

Well, The Citizens have already won the League Cup yet again and are looking top contenders for the Premier League title as well. It will be interesting to see what they can do in Europe as well, as they are one of the favourites to go the distance just like last time when they were eliminated by Liverpool.

The Manchester based side does have a habit of making things worse for themselves in crunch situations and it will be interesting to see what happens now, though the fans will be hoping for better results this time around. The business end of the season is surely going to be quite interesting yet again.

Brazillian Striker To Sign For Barcelona; Will The Deal Happen?