Survivor Series is still more than a week away, but WWE management is already looking ahead at future pay-per-views. TLC is scheduled to take place on December 15 this year, which is going to be the last WWE pay-per-view of the calendar year before we focus on Royal Rumble and the road to WrestleMania 36.

TLC has always been one of the most awaited pay-per-views of the year as fans enjoy the captivating stipulations and look forward to what kind of perilous spots and bumps wrestlers have planned this year. Recently WWE has started using the stipulation for ridiculous stakes and prize.

Last year, they used it to hang a guitar over the ring in Bobby Lashley vs Elias match, with the stipulation being that the wrestlers need to take the guitar and hit their opponent with it to win the match. This year too we might see a similar stipulation as according to the latest Wrestling Observer Newsletter, WWE is planning to have a ‘dog collar’ match between Roman Reigns and Baron Corbin at the event.

According to Dave Meltzer:

“It (Corbin vs Reigns) will be a gimmick match but the gimmick has not been decided upon. It could be tables ladders or chairs, but dog collar match has also been up for consideration.”

Going by the recent SmackDown episodes, WWE is leaning towards this stipulation as Baron Corbin recently cut a promo joking about Reigns’ ‘Big Dog’ moniker, which got a lot of negative reaction from the fans in the social media, but when has that stopped the company from doing anything disastrous… just ask “Shorty G” about it. Both, Roman Reigns and Baron Corbin are currently part of SmackDown’s 5-on-5 Survivor Series match, but their feud will continue after the show as both are not happy with each other’s involvement in the team.

According to Newsletter, two other matches are planned for the show. Rusev and Bobby Lashley will face each other in the first major bout in their on-going rivalry which also involves Lana. WWE women’s tag team champions, Kabuki Warriors could put their titles on the line against Charlotte Flair and Raw women’s champion, Becky Lynch at the event. This match would probably be used to further the storyline between Asuka and Becky as the management has been teasing a match between the two since last month after Asuka got a couple of pinfall victories over the champion in non-title matches. It was a huge deal for Asuka because WWE has been keeping Becky strong as she has barely lost any matches since WrestleMania this year.

Keep in mind, TLC is still more than a month away and we could see a change in the match-ups. Hopefully, Vince would come back to his senses and we might not have to see two wrestlers trying to fight each other for a dog collar in a WWE pay-per-view in 2019. 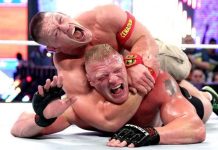 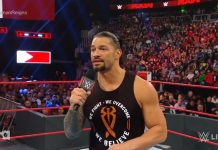 Three Ways Roman Reigns Can Make His Return To WWE

Shocking: Kevin Owens Reveals That He Wants To Be Like Roman...

CM Punk Reveals Whether He Will Wrestle In The WWE Once...