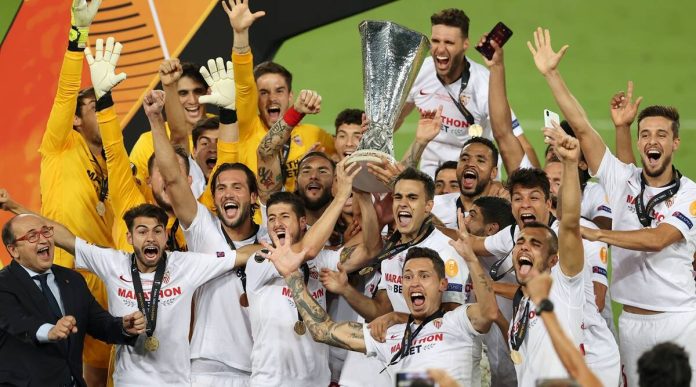 Antonio Conte’s Inter Milan got on the wrong end of a six-goal thriller as Lopetuigi’s Sevilla had the last laugh at Cologne. They came back from a goal down in stunning fashion to lift the trophy they have now made a habit of. Luuk De Jong scored two impressive headers with Lukaku turning into his own net to seal the deal for the Spanish side. Lukaku and Godin scored for the Italian outfit but left home being the second-best team. Inter still waits for a major title since winning the Coppa Italia in 2011.

Lukaku created all sorts of trouble earlier one, with Diego Carlos unable to contain his physicality. The defender ultimately pulled him down in the penalty area to award Inter a penalty. The Belgian slotted past Sevilla keeper Bono from the spot to draw the first blood for the Italian side five minutes on the clock. The Inter forward netted in the sixth consecutive European competition games to match Cristiano Ronaldo’s feet set in 2012 and 2013.

The Brilliant Europa League Campaign By Sevilla Ended On A High 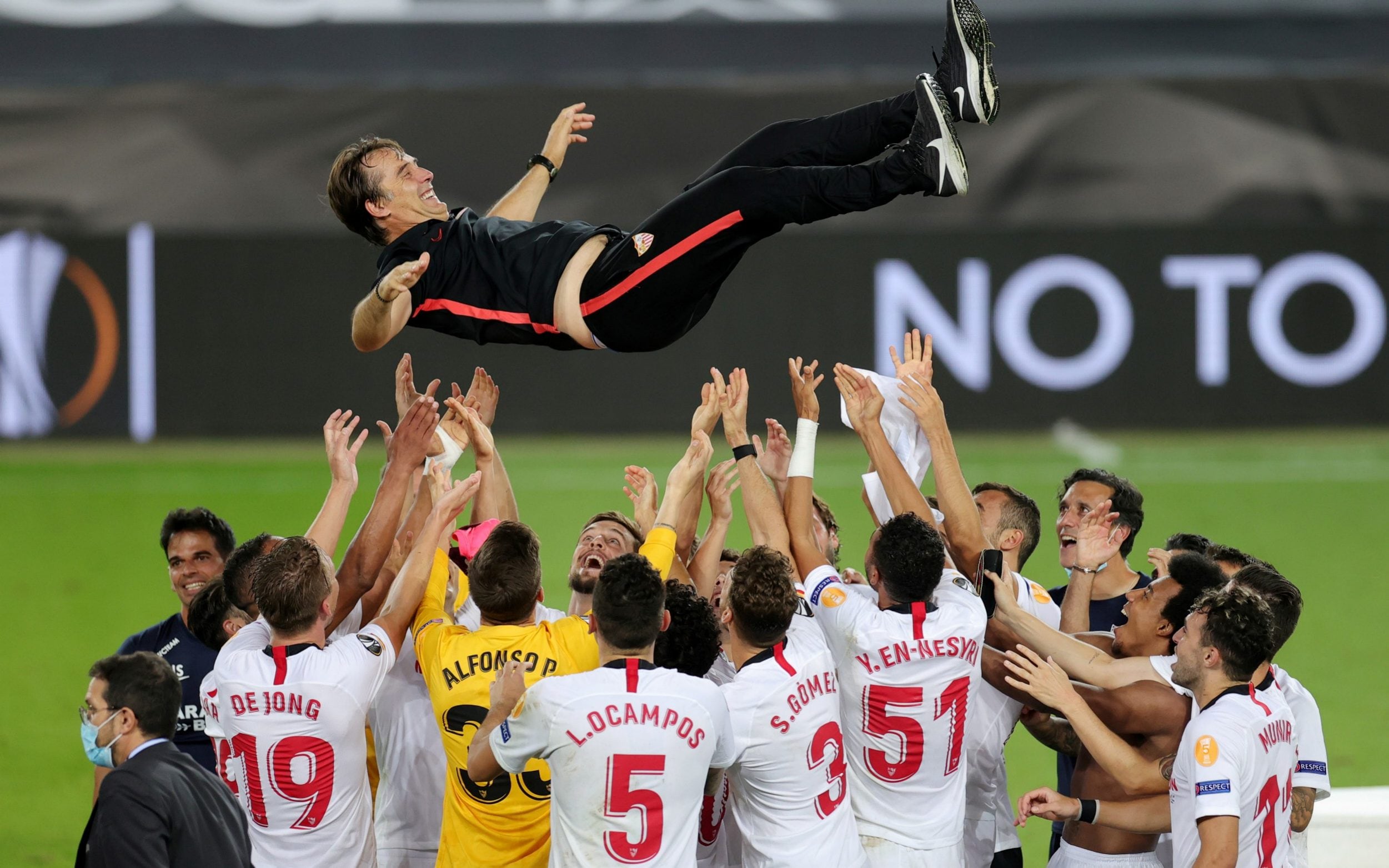 Like the story in the semifinal against Manchester United, the Spanish side came back quickly after going down. Sevilla began to dominate and got their reward as a result. Veteran Jesus Navas whipped in a perfect cross for striker Luuk De Jong to head in near post. Diego Godin should have done better but the Dutch international did well to fool his marker. The game was levelled 1-1 inside 12 minutes just like that.

Tension sprang up for the two sides getting into short busts between them. Antonio Conte was also cautioned by the referee in an altercation.

Inter got back to their possession play with the early heat cooling down. Lucas Ocampos created some half chances, meanwhile, with Handanovic untested in this period. Martinez also didn’t favour by going down into penalty area under minimal contact with him playing a poor game. Sevilla continued to cause problems from their fullback area in the little period of ball possession.

A Close Encounter To Say The Least

However, the record champions got in front by a superb header from the Dutchman again. Ever Banega led in a delivery from a free-kick with the former PSV man rising high and placing beyond Handanovic in a stunning yet planned goal. Lopetuigi’s decision to give the striker the chance in the starting lineup for the final paid off. Also, De Jong became the first player to score two headers in a UEL final.

Once again, their joy of scoring was short-lived as Inter scored the equalizer in exactly the way they conceded on the other end. Lukaku won a free kick out of Carlos, having a tough evening, in a similar situation. From resulting Brozovic’s free-kick, the 2014 Champions League goalscorer for Atletico did it in the Europa League final. Diego Godin’s header evened up everything before half-time. He thereby became the sixth player to score in both competition’s main stage after Allan Simonsen, Alenichev, Hernan Crespo, Steven Gerrard and Pedro.

The fireworks were expected in the second half in with an open play like this. Gagiliardini got the chance to get Inter back to the lead but his shot was blocked by Carlos. Suso then struck against Godin on the other end. Reguilon then did well to get inside the box but his volley hit the side netting. Next, Ashley Young almost curled in a beauty.

Lukaku Got All The Blame

Lukaku then received the golden opportunity to score his second and give his side the lead. Nico Barella played in a wonderful pass for the former Chelsea man to have a clear run at goal. He was denied by Bono, the keeper who put up excellent saves in the semifinal. The keeper got called into action again by punching out a dangerous Ashley Young free-kick. Sevilla then had to sub off star man, Ocampos through injury.

The Spanish side had no problem in coming out on front foot. Lukaku turned out to be the Villian this for Inter by scoring an own goal and the winner for Sevilla from a Diego Carlos acrobatic effort from Banega’s free-kick. He was back defending it but ultimately cost the team. Banega’s quality set-pieces continued to cause Inter dismay. Kounde heading over this time.

The Frenchman then contributed massively by keeping out substitute, Alexis Sanchez on the line at the other end. Ashley Young’s delivery in the box found Victor Moses who tumbled down before making the contact and from the scramble, the Chilean tried to put it past Bono. Brilliant clearance from the defender with huge potential.

A big chance fell to Candreva, another Inter substitute as Bono scrambled to save towards the end. That was that. Sevilla clinched the title for the record sixth time by defeating Conte’s Inter, making him the undisputed kings of the competition.