Veteran Premier League goalkeeper Petr Cech has revealed that he is worried about his former Club Chelsea ruining his dream of winning the Europa League with Arsenal. The two sides can potentially meet only in the final of the competition and Cech is eager to win the competition.

Ever since Unai Emery took charge of Arsenal football club in the summer of 2018, he has done quite a commendable job at the helm after replacing legendary French manager Arsene Wenger. The 69-year-old was in charge of the Gunners for 22 long years but Emery has breathed some fresh life into the club since his appointment. Arsenal currently occupies the fourth spot on the Premier League table and is quite confident of qualifying for the Champions League next term.

The North London giants also progressed through to the quarterfinals of the Europa League after coming back from a 3-1 deficit in the first leg against Rennes to win 3-0 at the Emirates in the Round of 16 of the competition.  Arsenal have now drawn Napoli and it will be an extremely tough test against Carlo Ancelotti’s men, if the English side makes it to the next round they will face either Valencia or Villarreal in the semifinals of the tournament.

Chelsea has also progressed through to the quarterfinals of the Europa League after breezing past Dynamo Kiev in their Round of 16 two-legged tie. Maurizio Sarri already tasted defeat in the final of the League Cup against Manchester City on penalties but the Italian is now looking to win some silverware in his debut season as manager of Chelsea. The Blues will face Slavia Praha in their quarter-finals.

However, there is the option that the two London sides meet in the final of the Europa League and one familiar adversary could await former Chelsea goalkeeper Petr Cech. The 36-year-old shot-stopper announced that he will retire at the end of the season and winning the continental trophy would be an ideal send-off for the Czech keeper. However, Chelsea could spoil his going away party. 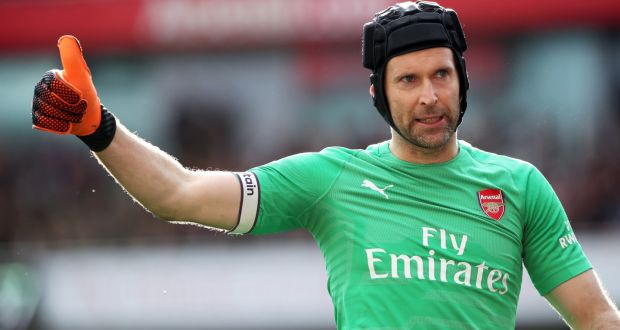 Cech spoke to reporters stating that he wanted to win his 19th career trophy but it will not be an easy task, “We knew before the draw we could face any team and I always say if you want to win any competition, you need to be ready to play any team, Whoever comes in our way, we would have to face them and find a way through. That’s just the way it is. I have already gone back to France and back to Rennes in this campaign, and Chelsea is always one of the teams who could get in the way. We will see. But I would love me to finish with a trophy! I am doing everything to make it happen and my team-mates are the same. The dream is still alive and obviously, we are happy with that. We want to do it for ourselves; we want to do it for the team and as well for the fans.”

It will not at all be easy as The Gunners face Napoli in the next round and Cech needs to worry about that, before he thinks about The Blues. Carlo Ancelotti’s side will be a major challenge and it will be interesting to see how things work out.