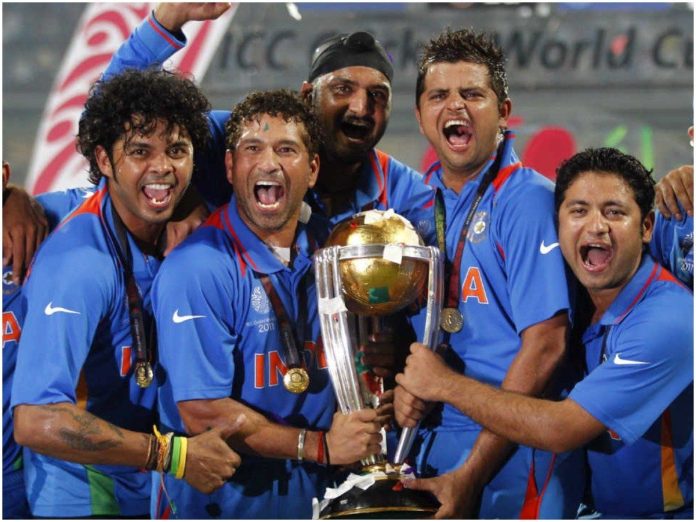 Team India won the World Cup in 2011 after a 28 years-long drought. The Men In Blues defeated Sri Lanka in the final of the ICC Cricket World Cup 2011. MS Dhoni and co. scripted a memorable win. The Indian fans can never forget that memorable night. MS Dhoni’s winning six is in the minds of all India fans. The whole Indian team rushed to the ground to celebrate the win after he hit the six off Nuwan Kulasekara’s delivery.

The Wankhede Stadium celebrated the joy of India’s long-awaited World Cup win. This was a memorable World Cup for all Indians as it was Sachin Tendulkar’s final World Cup. The Indian Team could manage to give the Master a proper send-off, by winning the World Cup for him. After the win, the whole Team went for a lap of honour with Sachin on their shoulders. It was a memorable and spectacular moment for every Indian fan. During a recent interview to Khaleej Times, Suresh Raina recalled that World Cup-winning moment. Raina was a part of the 2011 Cricket World Cup Team. He also played two crucial knocks in the quarterfinal and the semi-final. He said that Tendulkar’s calmness was what drove them to the win.

“With Sachin, it is always about his calmness. It was because of Sachin that we won the World Cup,” Raina said.

Raina revealed that Sachin was like the second coach in the Team. He made the team believe that they can achieve the win.

“He was the guy who made everyone in the team believe that we can do that. He was like the second coach in the team,” he added.

Raina compares the legacy of Lionel Messi and Sachin Tendulkar Raina feels both Sachin and Messi are superstars in their respective game. However, they are still humble and care for the people around them.

“I am a big fan of Messi. He is so down to earth. Both Sachin and Messi are very good when it comes to taking care of people around them because, in sports, you need to be really humble,” said Raina.

“You may be the number one player in the world, but your legacy is very important. You need to show gratitude to everyone,” he added.

Sachin scripted a World Cup to remember for him. He finished the tournament as the second-highest scorer in the tournament. He played nine games and scored 482 runs at an average of 53.55. However, Yuvraj Singh got the Man Of the Tournament award for his impressive all-round performance both with the bat and ball. The left-hander played a vital part in India’s performance throughout the tournament and helped them win the title.

Revealed: Where Ambati Rayudu Disappeared To During CSK’s Strategic Timeout