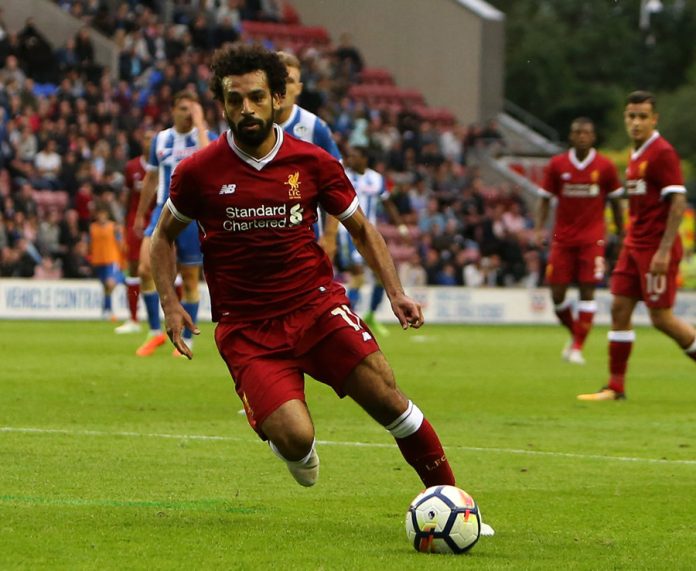 It was a crucial fixture for Jurgen Klopp’s men at the south coast against Bournemouth in their own den. However, the Reds who came to this fixture on the back of a 3-1 win over Burnley were certainly favourites going into the fixture. Little did the team from Merseyside disappoint, a hat-trick from Egyptian winger Mohammed Salah plus a Steve Cook own goal have allowed Liverpool to reach the summit of the Premier League atleast for the time being.

The Reds were eager right from the start and looked a better start from the beginning. It was Salah who broke the deadlock in a controversial affair as the  Egyptian was clearly offside though the goal stood due to the misjudgement of the assistant referee.

The 26-year old then completed his hattrick in the second up summing up a dominant performance for Jurgen Klopp’s side. The win bags them three crucial points as they leapfrog  Pep Guardiola’s Manchester City by a just a point with City playing Chelsea later at night.

The first goal came when Bournemotuh defence allowed acres of space to forward Roberto Firmino to release his shot, which was parried away by Asmir Begovic but Mohammed Salah was there to latch onto the rebound and gave Liverpool a very well deserved lead.

However, things get clearer when the replays came up and it was clear that the 26-year was in an offside position while Firmino unleashed his strike. The Egyptian man who is often embraced by chants was being booed by the home crowd at halftime. It was a very close call for the assistant and like the others, the assistant referees do not get to see replays, hence the first goal despite being an offside stood in Liverpool’s favour.

Once Liverpool broke the shackles in the 25th minute, though it was an offside the floodgates were open right after Liverpool had the lead. It was proven when the match restarted and it was a real struggle for the likes of Steve Cook and Nathan Ake to contain someone like Mohammed Salah along with Firmino and Shaqiri. Cook had a game to forget, the 27-year old centre-back was all over the place. He failed miserably to keep up with the Egyptian but was evidently no match for him. He also tried to pull Salah down during the second goal as he clipped from behind, but to Salah’s credit he went on and scored despite being in severe pain from the challenge.

Cook and Ake were kept busy throughout and it was evident that Bournemouth boss Eddie Howe gave the responsibility to manage Salah to Cook who is the more experienced of the defensive duo. Cook gave possession away at times and the Bournemouth fullbacks also did not make his job easy, Andrew Robertson was threatning down the flanks during his overlaps and caught the defence napping time and again. Similar instance happened when Robertson was allowed way too much space and his venomous cross across goal had to be dealt with Steve Cook with Sadio Mane and Salah lurking in the middle. However the  27-year old’s afternoon went from bad to worse when in his attempt to clear the cross he sliced the ball past Begovic resulting in a 3rd goal for the visitors.

Mohammed Salah may not be in the same blazing form as of last year but in crunch fixtures he is a man to watch out for. He adds that extra cutting edge to the Reds attack. The 26-year old who is now criticised as a ‘one season wonder’ has already scored 10 goals including the ahttrick today against Bournemouth.  The form he was in last season was somehting surreal and cant expect that level of service every year. His movement and eye for goal has been the same as last season and it seems like things are falling into place now for the Reds. Liverpool this season are more organized in defence and also in midfield and with Salah adding teeth to their attack Klopp’s men can give Manchester City and Pep Guardiola, a run for their money in the title race. Klop will hope that the hattrick against Bournemouth is only the start of things for the Egyptian winger and there is a lot left in his tank. Something which even the Liverpool supporters will be hoping. If there is a chance to lift the league title then there isn’t a better chance than this for the German tactician will Mohammed Salah spearheading his attack.

1.  Is this finally Liverpool’s year?

The Reds are currently top of the table as they win against Bournemouth takes them to 42 points, one ahead of Manchester City. Although the Citizens are set to come out later at night in a crunch fixture against Chelsea. So for the time being Liverpool will be sitting at the top but the main question is can they end the season being in the summit and break the jinx? So the answer is simple Klopp is known for his fluid and positive style of play where attacking players flourish under the German. He is also familiar with breaking the jinx as he lifted the Bundesliga title back in his Borussia Dortmund days and not once he did it twice consecutively breaking the Bayern domination in Germany. So if it is possible in Germany it is possible in the Premier League as well.

Liverpool, first of all, needs to get their focus on a single target. Let’s be honest the Reds does not have the dynamism and squad depth to take the pressure of both Premier League and Champions League. adding to that a tough group in Europe has not helped Klopp’s cause at all. It is time the German tactician sets one target this season and by the looks of it, the added pressure of the Champions League will increase fatigue among the players in a crowded winter phase and will invite injuries and will also have an effect in the performances. The winter phase is make or break situation in every season and if Klopp wants the league title he must tackle this phase the best possible way.  The Reds cannot afford any slip up in the league especially when you are chasing a team as dynamic as Pep Guardiola’s Manchester City.

Three Centre-Forwards Chelsea Can Look To Sign In The Upcoming Summer...