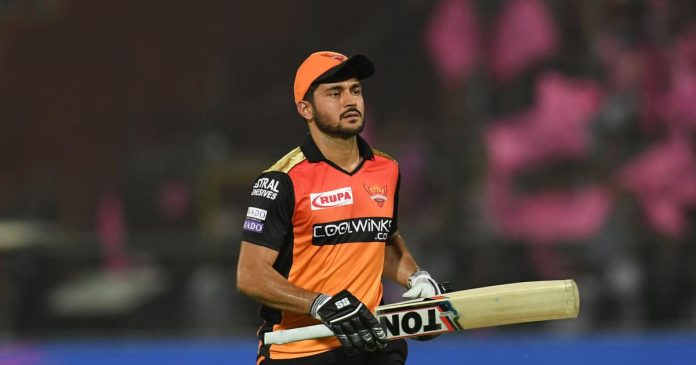 The IPL 2020 has seen some brilliant fast bowling. There have been some skilled pacers playing in the tournament, old and new. The addition of their quality and speed has been just brilliant. Anrich Nortje has been one of the new quickies in the house and he has been breaking records. Recently, he bowled a “fireball” to Sunrisers Hyderabad batsman Manish Pandey, who was lucky to survive it.

The pacer who bowled the fastest deliveries of IPL history in a single game came back for more. This time as the Delhi Capitals faced off against the team from Hyderabad.

The game was in the favour of SRH. It was till the 18th over that Manish Pandey and Kane Williamson were capitalizing on a great start by David Warner and Wriddhiman Saha. They were scoring runs for fun.

This was before Shreyas Iyer reintroduced pacer Anrich Nortje. The lanky Proteas star delivered a ball that was tagged as ‘fireball’, which was on the perfect line and length. Manish Pandey was on strike and it left him totally clueless.

Well, the fans couldn’t help but admire the pace and fury of the bowler. He has been one of the reasons for Delhi’s success. On a night when all their bowlers including Kagiso Rabada were hit to all parts of the park, Nortje did well for himself.

The batsmen still fear his pace and if he gets it right, as he did, he is unplayable. At the end of the day, it was a win for David Warner’s side. However, some deliveries deserve all the credit that they get.

A Nortje’s delivery (Pandey allowed to go through btw his legs).

That Yorker from Nortje to Pandey, Would have been a brainfade had that hit wickets ?

What Next For SRH And Manish Pandey?

Well, there is no doubt that the Indian audience always loves a good contest. Whether it is between two teams or between a bowler and a batsman. They really enjoyed the way that after dominating the game with the bat, the SRH batsman had no answer to that delivery.

Manish Pandey will be hoping to be careful if he has to face the Delhi Capitals or Anrich Nortje in the near future. The pacer is quite feisty and one wrong move could mean the end. He has already destroyed speed records in the current edition of the tournament and is getting wickets for fun. Can’t take your eyes off of the ball when he is bowling, for sure!!