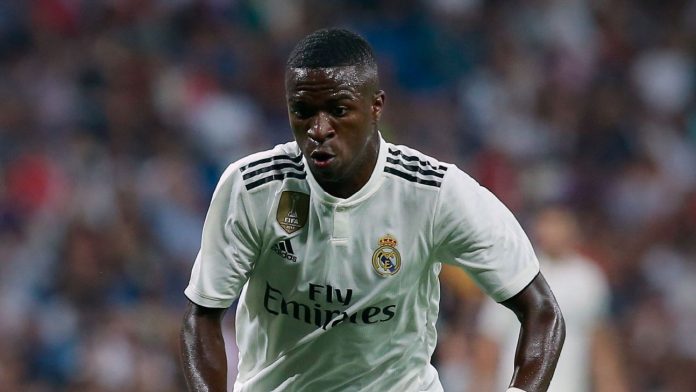 Los Blancos star Vinicus Jr. was subjected to the darker side of his club’s rivalry with Los Rojiblancos when he was bitten by an opponent in a derby match on Sunday against Atletico Madrid.

Real Madrid sensation Vinicus Jr. was bitten by the captain of the opposing team as the Madrid derby turned nasty. Vinicius, who arrived from Flamengo this summer for £40 Million, was representing the All Whites against Los Rojiblancos on Sunday. The sensation hasn’t found his way to the senior team yet but has been playing for their reserve side Real Madrid Castilla in Spain’s regionalized third division.

Vinicius scored both goals for the Madrid Castilla in their 2-2 draw with Atletico’s B team in Majadahonda. However, a clash with Rojiblancos captain Tachi turned out to be the biggest talking point of Derby. As Vinicius bumped into Tachi, the Rojiblancos captain attempted to sink his teeth into the back of Vinicius’ head. With referee missing entire extent of the incident, Tachi escaped with a yellow card while the Real Madrid sensation also saw him get booked for dissent.

However, speaking after the game Tachi conceded that he made a huge mistake and his actions set a bad example for the rest of Atletico’s youngsters. The young man also claimed that everything’s sorted between him and Vinicius as the duo made peace after the exciting derby.

Speaking to the club’s website, Tachi said: “It’s a reaction that came under the high pressure of the match. I’m not proud of what happened and it does not reflect anything about me as a player. This action is not representative of anything instilled in us by the academy and I know it is not an example for people watching at home to follow. It does not represent the way I play and it is a pity that this action has taken prominence and eclipsed a good game from us against Castilla.”

“At the end of the game, I spoke to Vinicius. We gave each other a hug and everything was left there. Now I have to learn from this and move on.”

Vinicius’ Future At The Club:

The Brazilian played the entire 90 minutes against Los Rojiblancos after making his debut for the Castilla last week. The forward will continue to play for the reserves, however, the Brazilian will train with Real’s first-team in an agreement sorted by new Real Madrid boss Julen Lopetegui.

MARCA: Vinicius Junior went out with a point to prove for Real Madrid Castilla on Sunday and he delivered by bagging a brace against Atletico Madrid B. #HalaMadrid pic.twitter.com/VckWEE3Yf0

Vinicius is rated very highly when it comes to the most highly-rated youngsters in world football. The Brazilian arrived from Flamengo this summer, where he was on loan last season. Amid of whatsoever happened when he bumped into Tachi, there is something that the teenager can cheer about and that is, first team manager Julien Lopetegui was in the stands when he scored those two wonderful goals to lead his team to victory.

He will need to avoid the temptations of the glamorous surroundings in which he’ll find himself and focus on developing into the best player he possibly can. And if he’s able to do all that successfully then even that day isn’t too far when we’ll see him challenging Leo Messi and Cristiano Ronaldo for the Ballon d’Or.

Why Arsenal’s “Wenger-Out Brigade” Is Just A Little Late Now, To...

Chelsea Win Against Arsenal In The London Derby To Stay In...

Unai Emery Shortlists Three Players Who Could Be The Next Arsenal...