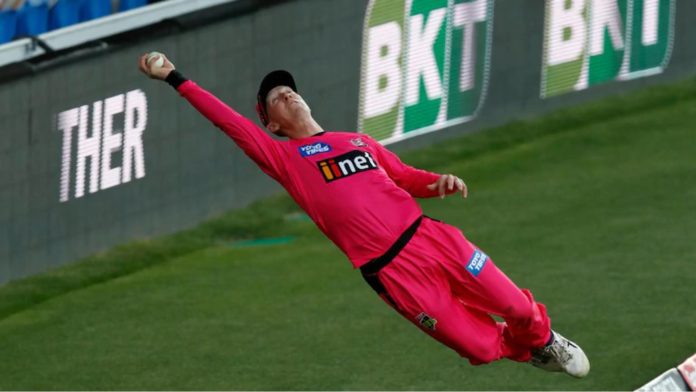 The Jordan Silk Save- T20 Cricket is the most popular format mainly because of the razzmatazz that it brings with fast-paced action between bat and balls. With the advancement in the sport, fielders have also gotten better with every passing year. They have developed unique ways of stopping runs, taking catches and creating runout situations.

These instances often change the complete complexion of the game, especially in the shortest format of the game. With Big Bash League starting today the excitement among the cricket fans were pretty high and the T20 Tournament Down Under has not disappointed with its opening fixture. It had a lot of action-packed cricketing action. Sometimes amid these actions some players pull off something extraordinary in the field which blows people’s mind. In the opening fixture where Hobart Hurricanes went up against Sydney Sixers, Jordan Silk pulled off a stunning effort on the field to save a certain six.

The Sixers middle-order batsman dived on the boundary line during the first innings and caught the ball mid-air and pulled it back on the field to save a certain six. It was Colin Ingram who struck the shot as he dispatched a short-pitched ball from left-arm spinner Steve O’Keefe. Silk’s effort was very acrobatic as he simply threw his body towards the ball and released it within the ropes before falling.

The Video Of Jordan Silk Making A Brilliant Save

Coming to the match, it was the Hurricanes who struck first blood with a brilliant win over the Sixers. Skipper Peter Handscomb and co. managed to post a considerable total of 178 after batting first, riding of half-centuries from Ingram and Tim David. Hurricanes had a poor start with both the openers, Will Jacks and D’Arcy Short falling cheaply.

Handscomb along with Ingram got a partnership going. However, the Sixers again came back in the game. That was with some key wickets. It looked like the Hurricanes were going to end up with a below-par total. However, fine innings from Tim David later propelled the Hurricanes to a challenging total.

They followed it up with some great bowling. That is, as they restricted a strong Sixers side to only 162. This helped them win the game by 16 runs. It was the experienced James Faulker who got rid of the dangerous Joshua Philippe early in the innings and then followed it up with picking up the crucial wicket of English batsman James Vince who looked dangerous with his knock of 67 runs from 41 deliveries. Youngster Riley Meredith also supported Faulkner well by picking a couple of wickets and not allowing Daniel Hughes and his men to settle in the chase.