The Mitchell Starc -Ravindra Jadeja Story- The second test match of the ongoing series between India and Australia is becoming more intense with each passing day. Team India got an exceptional start to the match in the first innings and things have only gotten better for the blues. After playing a wonderful partnership on Day 2, Ajinkya Rahane and Ravindra Jadeja returned to the pitch to continue from where they had left the match. Ravindra Jadeja was dismissed early by Mitchell Starc who gave the Indian all-rounder a teasing send-off.

India started taking control of the match from the very first day. A brilliant performance by India’s bowling unit lead by Jaspreet Bumrah successfully restricted the Aussies to a score of 195. Bumrah alone took four wickets.

On Day 2, India’s batsmen showed their favour. Debutant Shubman Gill played a crucial inning of 45 runs that built India’s momentum. Captain Ajinkya Rahane then took over the innings. Along with Ravindra Jadeja, he started taking India towards s big total. The Indians had a lead of 82 runs over the Aussies by the end of Day 2. Ajinkya Rahane scored a century and Rahane-Jadeja partnership scored more than 100 runs as well.

However, the Aussies bowlers started to take control on Day 3. After a mix-up between the two Indian batsmen, Ajinkya Rahane was run out after having made 112 runs. Jadeja looked highly upset with himself for causing the dismissal but Rahane cheered him up. However, that incident had seemingly shaken the Indian all-rounder as he lost his confidence after that.

It was during this time when Mitchell Starc came up with an idea to send Ravindra Jadeja. The Aussie pacer started bowling successive short balls. Starc had placed a series of Australian fielders on the leg side. His trick worked and he was successful in luring Jadeja to hit a pull shot.

Pat Cummins, who was waiting eagerly for a mishit made no mistakes. After a bit of juggling, he caught the ball and thus dismissed Ravindra Jadeja. Mitchell Starc got his confidence back after this wicket and he gave Jaddu a teasing send-off. You can watch the video below. 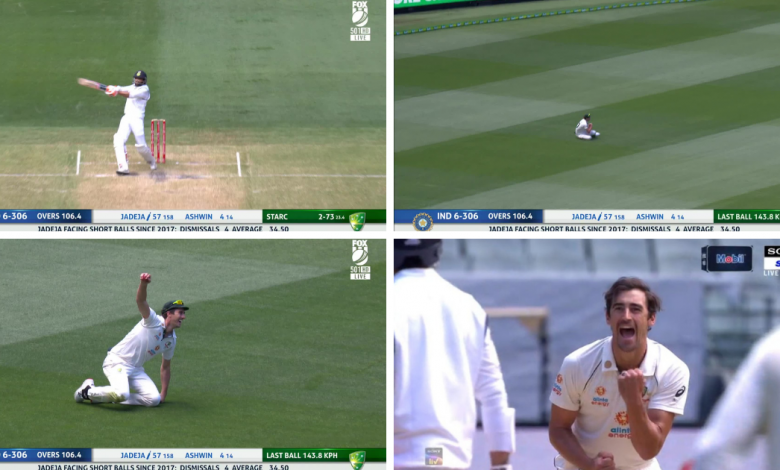 What Next For Team India In The Game-

India made 326/10 in their first innings and took a lead of 131 runs. Australia then came on to bat their second innings. The Indian bowlers were yet again ready for the Aussies and there was a similar result as was seen in the first innings. At stumps, Australia’s score is 133/6 and they lead by a mere two runs. The Indian bowlers dominated again. Jaspreet Bumrah, Md Siraj, Umesh Yadav, and Ravichandran Ashwin.

Ravindra Jadeja picked two wickets. According to the current situation, the Indian bowlers will most probably restrict Australia to a lead of not more than a hundred runs. In that way, it would be an easy victory for the visitors. However, they must not repeat the mistakes of the last match. It was in the second innings that India bottled up in the last match. The men in blue therefore must not become overconfident.