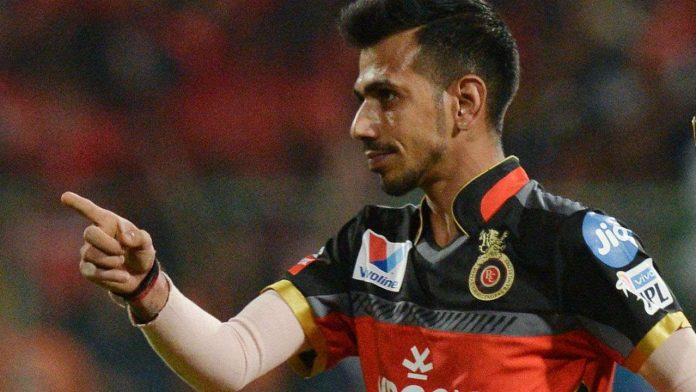 Yuzvendra Chahal Has Some Fun- Punjab Kings locked horns against Rajasthan Royals in the fourth match of the 14th season of the Indian Premier League at the Wankhede Stadium in Mumbai. Batting first, Punjab Kings made a meal of the Rajasthan Royal’s bowlers as they dispatched the ball to all parts of the stadium.

Rajasthan Royals also replied in style during the chase with captain Sanju Samson leading the charge with a blistering century. During the match, the social media was highly active with netizens posting and commenting on memes about the match.

Several memes became viral during the match. RCB and Indian wrist spinner, Yuzvendra Chahal, remains very active in social media during the IPL matches. We all know him for his humorous and witty comments on social media. What Yuzvendra Chahal Said On Twitter To Troll KL Rahul And Chris Gayle?

In his official Twitter handle, Chahal attempted to take a sly dig against Punjab Kings for their new jersey. Punjab Kings’ new jersey is quite close to RCB’s old jersey. Just ahead of the start of IPL 2021, Kings XI Punjab changed their name to Punjab Kings. They also changed their logo and jersey colour, hoping to change their fortunes in the Indian Premier League.

However, from the time Punjab Kings launched their new jersey, people started drawing comparisons with RCB’s old jersey. Cricket fanatics feel that Punjab Kings have been inspired by RCB’s old jersey. During yesterday’s game, Chahal hilariously pointed to this fact. He posted a photo of KL Rahul and Chris Gayle batting against Rajasthan Royals and welcomed the duo to his team Royal Challengers Bangalore.

Interestingly, both Chris Gayle and KL Rahul featured in the RCB jersey at one point of time. “Welcome to @RCBTweets boys @henrygayle @klrahul11” Chahal tweeted.

Summary of the match between Punjab Kings and Rajasthan Royals

The Wankhede Stadium witnessed sixes and fours being hit to all corners of the ground. batting first, KL Rahul was in sublime touch as he hit seven fours and five sixes. He scored 91 off just 50 balls. Chris Gayle scored a crucial quickfire 40 off 28 balls. Deepak Hooda came and played an impact inning. He scored 64 off just 28 balls. His innings included four 4s and six 6s.

In reply, Sanju Samson was the lone warrior for Rajasthan Royals. He scored 119 runs off just 63 balls. He hit 12 fours and 7 sixes during his breathtaking innings. Jos Buttler (25 off 13), Shivam Dube (23 off 15) and Riyan Parag (25 off 11) provided him support at the other end. However, his team still fell short of the target of 222 runs by merely five runs.

In the end, it was a great game of cricket. The troll from Yuzvendra Chahal was sidelined by the win for the team from Punjab. Had they lost that game, they would have had something really in common with RCB, not from this season though. The leggie couldn’t have too much fun at the expense of the Punjab Kings due to the way that they won. It was a good team effort and KL Rahul would have been proud of his boys for sure.