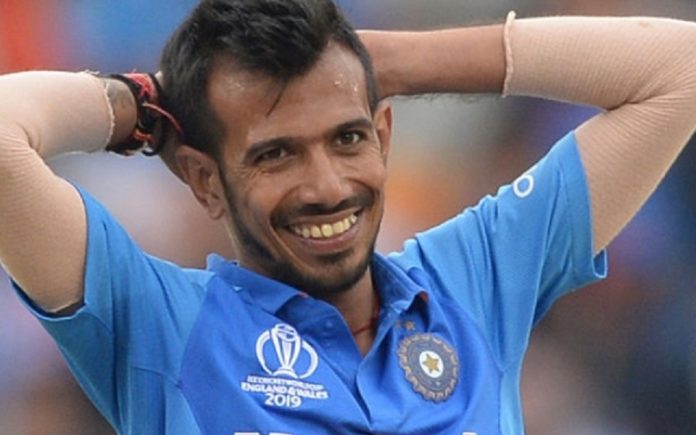 Yuzvendra Chahal is the man of the hour for sure. He is all over the Internet, with the fans talking about him. The right-arm leg-spinner is well-known for his antics. He was the talk-of-the-town over the recent weeks due to his TikTok videos. His funny obsession with being in the spotlight always brings up his name in all the conversations. This is something that Virat Kohli and co. really enjoy.

Chahal has a sense of humour, unlike anyone else in the Indian Team. His IPL team-mates also love his goofy nature. With that being said, the players are poking fun at each other all the time. One more such recent incident on social media went viral.

This time it was Chahal who took a kiddish dig at skipper Virat Kohli. The Royal Challengers Bangalore page on Instagram had put up this post recently. Yuzvendra Chahal got really excited about the whole situation. He just could not control himself and tagged his skipper.

See the entire conversation below-

DID YOU KNOW: @yuzi_chahal23 scored 1️⃣3️⃣5️⃣ & 4️⃣6️⃣ in the first & second innings respectively vs Himachal Pradesh U19s in the 2008/09 Cooch Behar Trophy in Bengaluru! He scored a total of 2️⃣8️⃣1️⃣runs in the tournament! ? Fancy playing up the order, Yuzi? ? #PlayBold #TuesdayTrivia

A post shared by Royal Challengers Bangalore (@royalchallengersbangalore) on May 11, 2020 at 11:30pm PDT

On this post, Yuzvendra Chahal tagged his skipper Virat Kohli. He added that it seemed that his skipper’s no. 3 spot was in danger now. Previously Chahal had always asked Kohli to send him up the order. He had suggested that he can really bat and needs more opportunities to prove otherwise.

Below is the response of Yuzvendra Chahal-

As usual King Kohli took it sportingly and in a fun way. He was quick to respond. The hand-eye coordination of the Indian skipper surely made him send out a smart reply.

He was quick enough to troll Yuzvendra Chahal, who fell short of words. This whole incident went viral on social media and the fans absolutely loved it. The best thing to happen on the Internet recently.

Here is what the skipper, Kohli actually said-

This is not the first time that Yuzvendra Chahal has wanted to bat up the order. Previously, he had asked Kohli’s wife Anushka Sharma to recommend him to be pushed up the order. That was another funny conversation that the fans really loved.

Previously, he had jokingly asked Bollywood actress Anushka Sharma to help him open the batting for India. Yuzvendra Chahal added that Virat might listen to her suggestion and do the needful. This might actually help him in opening the batting.

In the lockdown period when there is no cricket happening at all, Chahal is entertaining the audiences. He is a fan-favourite it seems. His TikTok videos, Chess tournaments and more entertain everyone including his own team-mates.

Let’s hope that he can perform this well on the pitch as well, once the cricket resumes. He would be expected to lead the spin-attack for the Indian team, in the upcoming T20 World Cup. Also, he will want to perform well in the Indian Premier League. We at Beyond The Posts wish Yuzvendra Chahal the very best for the upcoming tournaments.