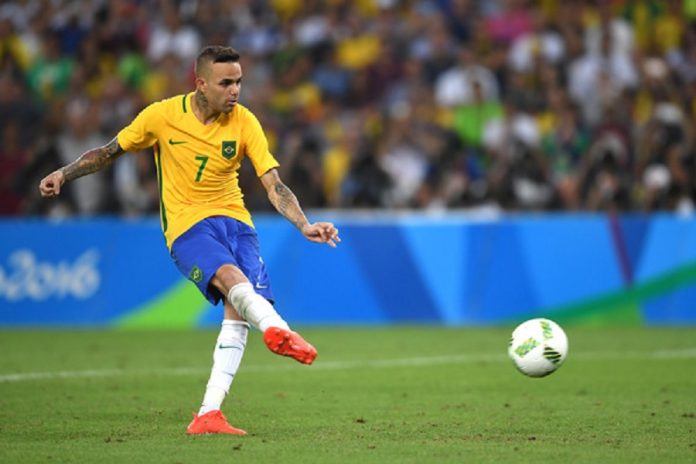 Liverpool have reportedly gone ahead of Manchester United in a bid to land Gremio striker Luan by submitting a £30m bid for the player. Both Liverpool and United have been heavily linked with a move for the Brazilian for a while now with both clubs eager on taking the player on board before the summer transfer window shuts this week.

However it appears that the Merseyside outfit have now gone ahead and made the first official move for the attacker, by placing a huge offer to the Brazilian side in order to acquire Luan’s services.

Gremio are eager to keep hold of their priced possession, but would be willing to sell the player if any club meet their current valuation for the player.

Luan was representing his nation Brazil at the Rio Olympics. The forward finished the tournament on the high note as he was the second-joint top goal scorer along with Gabriel Jesus and scored only one goal less than Barcelona man Neymar.

Liverpool are said to have made a bid for the player, which might make the new Red Devils boss Jose Mourinho step up his chase to bring Luan to Old Trafford.

The new United boss has been looking to bolster his attacking options, prior to the summer transfer window closing.

At the moment, Mourinho has Zlatan Ibrahimovic and Marcus Rashford as the options to utilize up front and could be ready to enter into a bidding war for the player.

Luan is speculated to be the next big thing in Brazil, as he is a highly talented young man. He might go on to achieve big things in the game one day, though at this moment it is surely going to a gamble and the Portuguese manager will have to decide whether it is worth taking or not.

World Cup winners like Kleberson and talented teenagers like Anderson have come to the Theatre of Dreams and have failed to make the kind of impact one would expect from them.

If he makes a switch to Manchester he would seldom find first team opportunities and would have to spend most of his time with the Under-21 side. For a player with such immense talent, it would be unfair on the teenager as it would on United’s part to allow him to do that.

Luan is still a really young footballer and needs further time to develop is game. A move not just to Old Trafford but to another major European big name right now would only hamper his development as a player. The time is just not right, United do not need Luan and Luan does not need Manchester United.