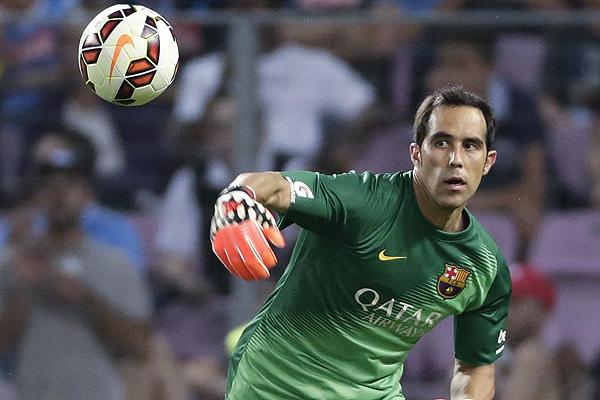 Claudio Bravo has arrived in Manchester complete his much awaited move to the Etihad as Joe Hart has been showed the door by new boss Pep Gaurdiola. Barcelona’s technical secretary Robert Fernandez had earlier made it clear that the  transfer would not be processed until a replacement is found, But the Chile international is now in Manchester ahead of a medical and a finalization of personal terms which means that the Catalans have made room for a new stopper.

When asked about the current situation on the deal, City boss Guardiola did not refute the suggestion whether the deal was on the go or no, “I cannot deny what everyone knows,” Pep Gaurdiola said.

“I am sorry guys. When the deal is complete or not complete, after I will be open to answer about one player. At the moment, he is not our player.”

Barcelona on the other hand have agreed a deal with Ajax to sign Jasper Cillessen, Making the way for Bravo to swap the Nou Camp for the Etihad which will trigger Joe Hart’s departure from City.

The Catalans had announced on Saturday that an agreement is been struck with City for the transfer of Bravo, who has been a first choice for Luiz Enrique in the domestic league since he made a switch from Real Sociedad in 2014.

Many sources have claimed that a £17m deal has been agreed between the two clubs and Bravo’s family were telling friends they were moving to Manchester.

Guardiola’s desire to sign Bravo has put a Big question mark on the future of England No 1 Hart,

Everton, Sevilla and Borussia Dortmund have all expressed an interest with Everton emerging as a possible destination for the 28 year old, And Hart is also open to a move abroad,

Hart had been left on the bench for City’s opening Premier League matches of the season, with Pep Guardiola preferring Willy Caballero for victories over Sunderland and Stoke City, With Pep had made it clear on Friday that Hart is free to leave if he wishes too, Ending his 10 year spell at the Etihad.

Guardiola had made it clear to Hart that  he must learn a new tactical role as goalkeeper in order to break into the first team and would be given the chance to do so while playing as a second fiddle to Caballero.

Guardiola always wants a certain quality in his player and he demands it, The goalkeeper plays an instrumental role in the team’s build-up play.  And Hart had made only 562 short passes over the past three seasons, while Guardiola’s previous ‘keeper at Bayern Munich, Manuel Neuer, made 2,077 in the same period.