Arsenal Midfielder Superstar Signs For London Club, After Wenger Deems Him Surplus To His Squad 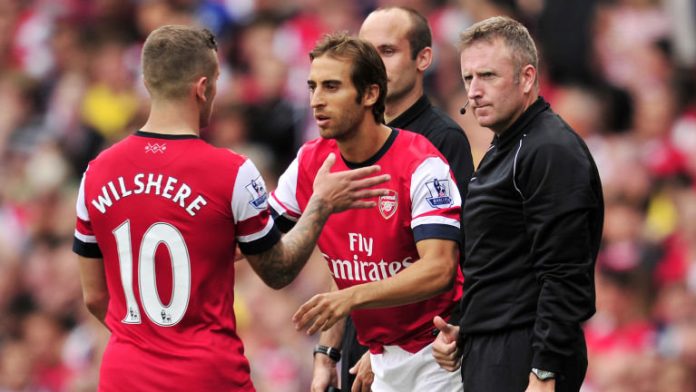 As per reports, Crystal Palace have completed the signing of ex-Arsenal midfielder Mathieu Flamini. The Londoners signed the France international Mathieu Flamini on a one-year deal from Arsenal. The 32 year old superstar left the Emirates this season after he made 246 appearances for them over two spells in north London and in these two spells he won three FA Cups.

He had joined Arsenal from French club Marseille in summer of 2004, and then won F.A cup in 2005, In his first spell he played till 2008 and then went to Italy to play for A.C Milan.

Altough Flamini did return and signed for the  Gunners again on 29 August 2013 and became Arsenal’s second signing of the summer that season, after they had signed France international Yaya Sanogo, He has since then won two F.A cups with Arsenal.

The France international also won the Serie A title in 2011 during five years stint at AC Milan, he becomes Palace’s fifth permanent signing of the summer of this season so far.

However Flamini has never commanded a transfer fee a single time, he moved from Marseille to Arsenal and then  Arsenal to AC Milan and then returned to the Gunners when his contract expired on each occasion.

The Frenchman has been a free agent after he was released by the Gunners in the summer this season. he had been without a club and thus he was able to make a move outside of the transfer window, The Frenchmen has been included in Palace’s 25-man Premier League squad, and he will be wearing the No. 4 shirt.

Talking to Crystal Palace’ official website, he said, “It is a very interesting challenge for me and I am very excited to be here. I had the chance to discuss the move here with Alan Pardew and he really helped me make my decision.”

I thought it was important to get another midfield player. His playing ability will help us but also his leadership qualities and his ability of how to win games in a passing style. I am delighted that we have secured a player of his stature.

The former Gunners midfield might make his debut in Saturday’s trip to Middlesbrough, where Palace will be hoping to win thier first  Premier League game of this season after  having taken just one point from their opening three fixtures.

Arsenal have wished Flamini luck on the start of his new journey through their twitter handle as well.