Chelsea 4-0 Manchester United, As Jose Mourinho’s Side Humbled At The Bridge 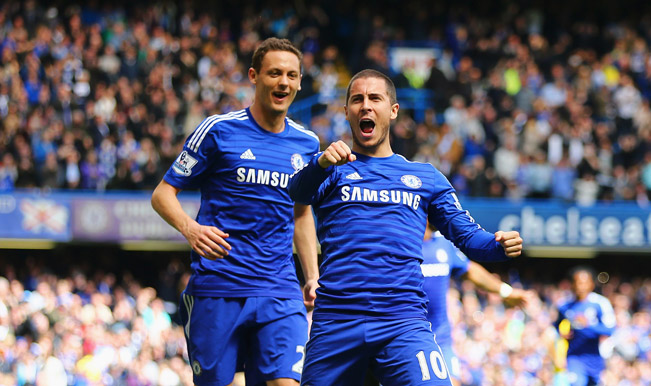 Jose Mourinho returned to Stamford Bridge barely 10 months after being sacked by the club after a debacle of a title defence in his second spell. What could’ve been a fairytale return to avenge his sacking turned into a nightmare as Chelsea routed his Manchester United side 4 goals to nothing. Manchester United travelled to London on the back of an impressive, morale-boosting midweek result against Fenerbahce, which they ended up winning 4-1. Chelsea who have the supposed luxury of not playing in Europe this year were fresh and made no changes to their starting XI, retaining the 3-4-3 formation.

Manchester United were without Wayne Rooney who aggravated an injury during training which he had “hidden” before the mid week Europa League clash, according to Mourinho.

The match took off from the very start, with Chelsea scoring the fastest goal in this season so far, 33 seconds into the match, Pedro made a run, flying past both Blind and Smalling before rounding off De Gea, who had rushed out to deal with the danger, and poking the ball into an empty net.

Chelsea enjoyed large swathes of possession, and had the United back four on their toes, the host’s second came through a Gary Cahill shot which came off the back of Blind after shooting it from close range.

Paul Pogba, who scored twice in midweek was absent for most part of the game, and a shadow of the player who played under Antonio Conte during his time at Juventus.

Manchester United were far from convincing, and the only threat was provided by right back Antonio Valencia who made a number of glaring runs to cross the ball into the area.

After the break, Mourinho introduced Mata who replaced Fellaini, to add some creative flair to United’s game. United had more bad news in store for them as Eric Bailley limped off with an injury in the early stages of the second half. United seemed to have control over the game until Eden Hazard got the ball and Smalling stood off to let the Belgian score easily into the bottom corner.

United’s defensive frailty was at full display, as Kante scored the fourth for Chelsea and his first since joining in the summer, sublimely going past Smalling to score the fourth.

The match could’ve have ended differently had Ibrahimovic scored from a brilliant cross from Valencia or had Lingard forced a rebound, both in the first half or had Martin Atkinson given David Luiz a red card instead of a yellow, for a knee high challenge on Fellaini.

Manchester United’s exigent schedule seems to have taken a toll on the players, and with another taxing match in midweek against Manchester City they have to cope well with the demands of the game.

It was also for the first time in 5 years that Ibrahimovic had gone 5 games without scoring, and it also happened to be Jose Mourinho’s heaviest Premier League defeat, which came at the hands of his former team, which makes it even bitter.

The scenes on the touch line were fairly contrasting, with Mourinho looking baffled by how his plans had failed miserably, and a jubilant Conte in his own dugout.