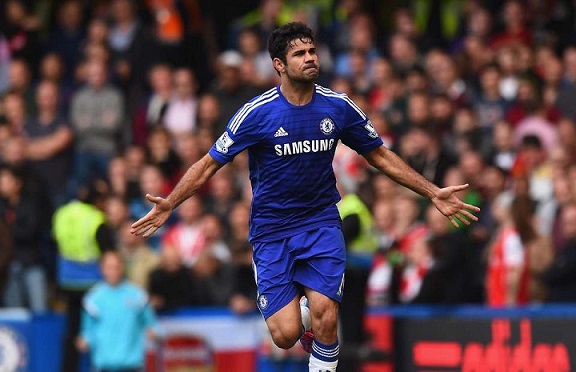 Chelsea moved 11 points clear at the top of the English Premier League after they managed to defeat Paul Clement’s Swansea City on Saturday at Stamford Bridge. Cesc Fabregas opened the scoring, but Llorente’s header late in the first half got them on level terms. However Pedro and Diego Costa made sure that the three points remained with Chelsea after goals deep in the second half.

Cesc Fàbregas was offered a rare start but still delivered at his magnificent best, scoring on his 300th Premier League appearance and providing an assist along with his threatening runs from deep. His goal came after 19 minutes when Eden Hazard started an attack llinking up with Costa and Pedro as the latter’s cross found Fabregas near the penalty spot and the former Gunner stabbed his shot into the bottom left corner.

Fabianski then made a superb save to keep Swansea in the game as he denied Fabreags’ volleyed effort with a stunning stop, it proved to be a massive moment in the context of the game as Swansea equalized despite Chelsea’s dominance on the game.

Gylfi Sigurdsson arced in a free-kick just inside the Chelsea half and picked out centre forward Fernando Llorente in the Chelsea box, unchallenged, the Spaniard thumped his header past Courtois and leveled the score just before the half time whistle was blown.

Chelsea again started the first half on the front foot as Fabianski made another lovely stop to prevent Eden Hazard’s shot from arrowing into the far corner, but were lucky not to concede a penalty as Sigurdsson’s flick was handled by Cesar Azpilicueta inside the penalty box.

However, Chelsea’s lead was restored when Pedro found some space outside the Swansea penalty box and curled an effort that went under the dive of Fabianski. The Pole should have certainly done better to keep out the shot but it crept into the bottom corner.

As Swansea tired out, Diego Costa ensured a victory as Eden Hazard’s trickery was too much to handle for the Swans defense and he cut back a lovely cross for Costa to tuck home from close range. The Blues were delighted by the result after managing to overcome an energetic Swansea side that looked nothing like relegation contenders.