Another Chelsea Deal Done, As Conte Adds This Star To His Current Squad 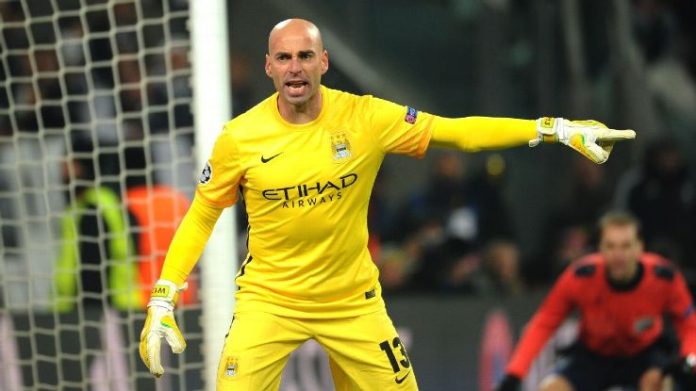 Chelsea were crowned the Champions of England, under the managerial expertise of Antonio Conte, in his debut season in the Premier League. It was a solid performance in the league and the Blues would have been more than happy, with their level of performances, right till the end.

Despite that, some of the players who were not really happy with the amount of game time that they were getting at the club and have decided to make away.

Also, some new stars will be moving to Stamford Bridge and it seems that the west Londoners have confirmed the signing of a new keeper now.

The man in the spotlight is Willy Caballero, the latest keeper to be signed and now the replacement of 30 year old Asmir Begovic, who joined Bournemouth some time ago.

The man between the sticks for the Citizens, was never really given a first team role. He always played second fiddle to the likes of Joe Hart and Claudio Bravo.

Despite that, he has now decided to leave the Etihad and join the London based outfit, in search of a bit more playing time, than what he was getting with City.

His desire to play more has seen him join Conte’s side as a free agent and if things work out for him, it could be a great move to say the least.

Well, Chelsea fans must understand one thing that the keeper has looked confident in between the sticks. He does not have that “big name” to go along with him, but his keeping skills far surpass his small stature in the world of football. He is strong and confident and the former Juventus manager will be happy with the player that he has just added to his team.

The former Argentine U-20 international played a few games for his former club last term, though in the 3 years or so that he spent in Manchester, he only represented them 23 times.

The stats don’t highlight his level of performances, as neither Pep Guardiola, nor his predecessors, had the confidence in the man to make him a regular in their side.

Things were not looking any better for him and his future was still dark at City, which is why it seemed like a great decision to move on, now that his contract expired with them.

When the champs of the top flight of English football come calling for you, who would want to refuse, though he might still be second choice to Thibaut Courtois, who himself has been part of some rumours, as well.

Will Caballero be able to challenge the Belgian international for a first team spot or not, shall be seen in the days to come, though Conte has played his cards well.

Do like our page and share this article, if you find that it has given you some information about Chelsea F.C. We will keep sharing more news, as and when we get the updates and there is some action in the transfer market.